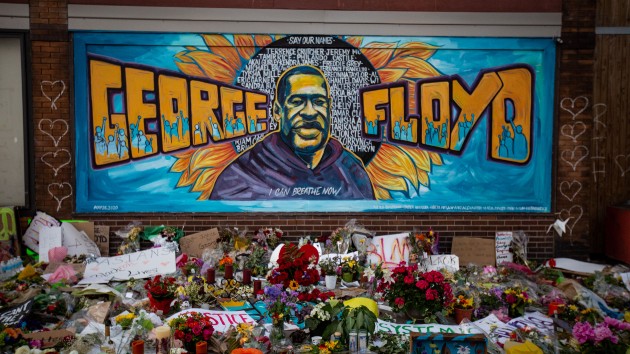 Jason Armond / Los Angeles Times via Getty ImagesBy ROSA SANCHEZ, ABC News(MINNEAPOLIS) — The Minneapolis Police Department will not alter or remove George Floyd’s memorial amid ongoing protests.”We respect the memory of him and will not disrupt the meaningful artifacts that honor the importance of his life,” the police department tweeted Saturday.The tribute, which is located at 38th Street and Chicago Avenue — near where Floyd was killed on Memorial Day when a Minneapolis police officer kneeled on his neck for nearly nine minutes — has become the mourning place for hundreds of people over the past few weeks, and the center for various Black Lives Matter protests.Mourners have left flowers at the location and painted murals of Floyd on the outer walls of Cup Foods. They have even erected a wooden sculpture of an upraised fist — a symbol of the Black Lives Matter movement — in the middle of the intersection.Many hope to turn the memorial into a permanent shrine honoring Floyd’s memory and the memory of others who have died at the hands of police.All four officers involved in Floyd’s death have been fired from the force. Derek Chauvin, the officer who kneeled on Floyd’s neck as Floyd pleaded for his life, has been charged with second-degree murder, third-degree murder and second-degree manslaughter.The other three officers who were present at the time of Floyd’s arrest and death have been charged with aiding and abetting second-degree murder and aiding and abetting second-degree manslaughter. None have entered a plea. Copyright © 2020, ABC Audio. All rights reserved.