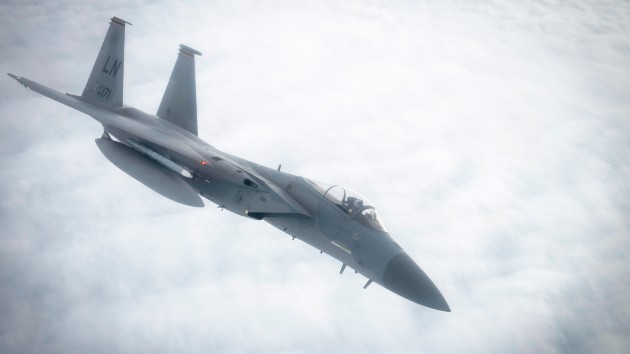 U.S. Air Force photo by Tech. Sgt. Emerson NuñezBy MORGAN WINSOR, ABC News(LONDON) — An American fighter jet crashed into the North Sea off the coast of England on Monday morning, officials said.The F-15C Eagle, from the U.S. Air Force’s 48th Fighter Wing, was on a “routine training mission” with one pilot on board when it went down at approximately 4:30 a.m. ET, according to Col. Will Marshall, commander of the 48th Fighter Wing.U.K. coastguards later located the wreckage of the downed plane, and efforts were underway to recover it from the water on Monday evening.The pilot was later found and confirmed to be dead.”This is a tragic loss for the 48th Fighter Wing community, and our deepest condolences go out to the pilot’s family and the 493rd Fighter Squadron,” the 48th Fighter Wing said in a statement on Twitter.”The cause of the crash is unknown at this time,” Marshall said in a video statement Monday. “We will provide updates as they become available, while prioritizing respect and consideration for the pilot’s family.”The aircraft deployed earlier that morning from the U.K. Royal Air Force station near the village of Lakenheath in Suffolk, England. The base hosts U.S. Air Force units and personnel.”We’re extremely grateful for the timely response of our U.K. counterparts in support of these recovery efforts,” Marshall said. Copyright © 2020, ABC Audio. All rights reserved.

After brain-eating amoeba found in county’s water supply, advisory lifted in all but 1 area
Amid pandemic, confidence in CDC erodes with questions of political interference
Secretary of State Mike Pompeo to headline fundraiser for Christian charity in swing-state Florida
Only 10% of US adults may have COVID-19 antibodies: Study
Two former leaders of Holyoke Soldiers’ Home charged in COVID-19 deaths
Black flight attendant and white airline CEO reunite after emotional talk on race