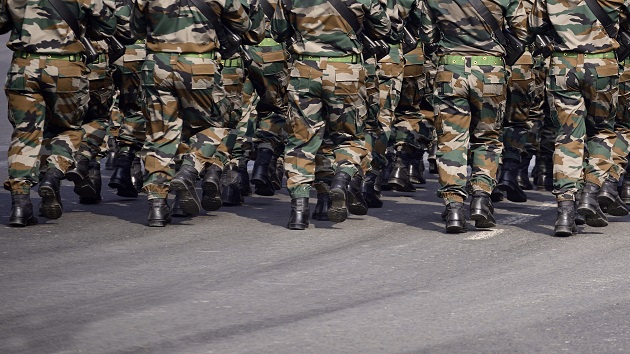 iStock/suman bhaumik(DELHI, India) — BY: GUY DAVIES and SREYA BANERJEEIndian and Chinese soldiers clashed on the border overnight, leaving 20 Indian soldiers dead and marking the first casualties in a conflict between the two powers in decades.”Indian and Chinese troops have disengaged at the Galwan area where they had earlier clashed on the night of 15/16 June 2020,” Col. Aman Anand, spokesperson for the Indian army, told ABC News. “Seventeen Indian troops who were critically injured in the line of duty at the stand off location and exposed to sub-zero temperatures in the high altitude terrain have succumbed to their injuries, taking the total that were killed in action to 20.””Indian army is firmly committed to protect the territorial integrity and sovereignty of the nation,” he added.The skirmishes overnight marked an escalation in the growing conflict between China and India over the past few weeks.On Friday, the Daily Telegraph reported that 12,000 Chinese troops had entered Indian territory in Ladakh, in the country’s northeast, after weeks of escalating tensions.India and China went to war over disputed territory at the Himalayan border in 1962, but the announcement from the Indian army marks the first deaths registered in the conflict in at least 40 years.While the reasons for the dispute are historic in origin, the recent turn of events can be attributed in part to India’s growing strategic partnership with the United States at the expense of Chinese influence, Dr. Elizabeth Chaterjee, a lecturer in regional and comparative politics at Queen Mary University in London, told ABC News.”The escalating dispute has been driven by a newly aggressive China, taking advantage of the coronavirus crisis to assert itself on the disputed border with India as well as in Hong Kong and around Taiwan,” she said. “More recently China has been irritated by India’s criticism of the Belt and Road Initiative and defense cooperation with the United States, Japan and Vietnam, aimed at containing Chinese expansion. At the same time, China’s grip has only continued to tighten over the Himalayan border region further west as it lends huge sums to its close ally Pakistan — India’s nemesis — for the China-Pakistan economic corridor.”The true number of casualties on both sides is still unclear, with Chinese officials yet to release a statement of the scale of the damage on their side.The Chinese foreign minister said that Indian troops had carried out “violent acts” against Chinese soldiers, according to Chinese media. Reports so far have suggested there was no exchange of gunfire, but the skirmish itself is “shrouded in secrecy,” according to Chaterjee.”Both sides possess nuclear weapons, which makes dramatic escalation an unlikely but extremely alarming prospect.” she said. “As the conventional military imbalance between China and India has widened, Beijing has looked increasingly willing to make its weight felt in the Himalayas as well as in the Indian Ocean and South China Sea.”