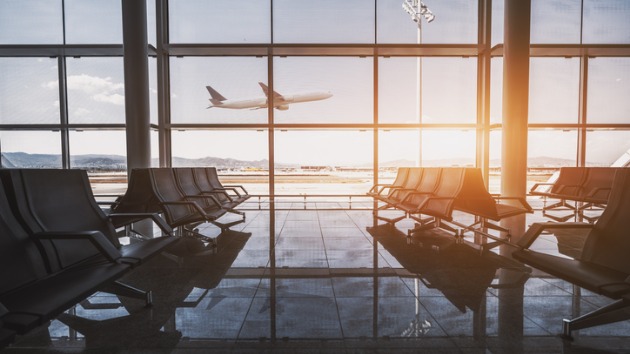 skynext/iStockBy MINA KAJI and AMANDA MAILE, ABC NEWS(WASHINGTON) — American Airlines, United Airlines and Delta Air Lines are now threatening to ban any passenger who refuses to wear a mask on board. Their decision is part of a larger push from all major United States airlines made to hold fliers accountable following complaints from passengers that their mandatory mask requirements were not being enforced.By May 11, all major U.S. airlines put new policies in place stating that passengers and crew have to wear face coverings in order to fly. Exceptions exist for kids, passengers eating and drinking and for those with certain medical conditions.Still, not everyone has been following the rules.Dr. Michael Anderson was under the impression “[he] would be surrounded with everyone wearing a mask” on his United Airlines flight on June 6 to Denver, but was shocked to see at least three passengers board the aircraft without face coverings.”I’m still angry,” Anderson told ABC News as he explained that neither the gate agent nor the flight attendant stopped them. “I was just very, very concerned. If the airlines want us to start flying again, want us to feel as though they’re safe, well then how are they not enforcing the basics of a mask?”On Sunday, 51-year-old Stephan Termaat had a similar experience on an American Airlines flight from Miami to Dallas. Termaat said he asked the flight attendant to intervene after he noticed two guys sitting three rows ahead of him, not wearing masks.The flight attendant told Termaat it was their policy to require masks on board the aircraft, and that she could offer them a mask, but could not make them wear one, according to him.”it is a little disconcerting that [they] have a policy and [they] choose not to enforce it,” Termatt said.U.S. airlines announced their intent to put rigor around their mask rules on Monday, through Airlines for America, A4A, the industry trade organization representing major U.S. airlines. This comes as airlines continue to add flights to their summer schedules and the number of people flying continues to steadily increase — the first signs that demand for air travel is beginning to recover after reaching historic lows due to the COVID-19 pandemic.”U.S. airlines are very serious about requiring face coverings on their flights,”Nicholas E. Calio, the president and CEO of A4A said in a press release. “Carriers are stepping up enforcement of face coverings and implementing substantial consequences for those who do not comply with the rules.”A4A said it is up to each carrier to determine the appropriate consequences and there are still questions surrounding each airline’s individual enforcement policy.According to an internal memo from United Airlines obtained by ABC News, if a flight attendant notices or is informed of a passenger on board who is not wearing a mask and the passenger does not fall within an exception, “the flight attendant will proactively inform the customer that for the health and safety of everyone, face coverings are mandatory.”They are then instructed to “offer to provide the customer with a mask if needed.””If the customer continues to be non-compliant, flight attendants will do their best to ensure compliance, again inform the customer of United’s policy, and provide the passenger with an In-Flight Mask policy reminder card,” the memo states. “If a customer continues to not comply, the flight attendant will file a report of the incident, which will initiate a formal review process.”According to the memo, “Any final decision or actions regarding a customer’s future flight benefits will not occur on board, but will instead take place after the flight has reached its destination and the security team has investigated the incident.”American Airlines said they already enforce their mask policy at the gate, prior to boarding, and will now deny boarding to customers who don’t comply. They “may also deny future travel for customers who refuse to wear a face covering.”Delta Air Lines said those who choose not to comply “risk future flight privileges with Delta.”Unions and Democratic lawmakers have repeatedly called on the federal government to issue a standardized, industry-wide mask requirement.”Masks are essential to keep passengers, flight attendants and frontline aviation workers safe during the coronavirus pandemic,” Sara Nelson, a current flight attendant and the president of the Association of Flight Attendants-CWA, AFL-CIO said Monday. “It is also essential to rebuild confidence in air travel. The federal government has completely abdicated its responsibility to keep the flying public and aviation workers safe during COVID-19. Today’s action by Airlines for America members is important, but the industry alone cannot fix this.”During a Politico interview on June 3, U.S. Transportation Secretary Elaine L. Chao referred to these protections as more “labor-management” issues than anything else.”When the federal government gets involved, [they] tend to be much more heavy-handed,” Chao said, adding that the department would continue to “monitor” it.Last week, the U.S. Department of Transportation announced that nearly 100 million cloth facial coverings would be sent to airports, transit agencies and Amtrak for passenger use “over the coming weeks.”ABC News’ Gio Benitez and Sam Sweeney contributed to this report.Copyright © 2020, ABC Audio. All rights reserved.

Wisconsin declares public health emergency due to COVID-19 spread on campuses
‘On the Basis of Sex’ and ‘RBG’ returning to theaters in tribute to Ruth Bader Ginsberg
Chelsea Clinton: ‘Unconscionable’ that Trump ‘lied’ to public about COVID-19
Order to shorten 2020 census didn’t come from Census Bureau, watchdog says
Air Force veteran aims to calm violence and help young victims in her community
‘The West Wing’ cast reuniting for HBO Max special to benefit When We All Vote