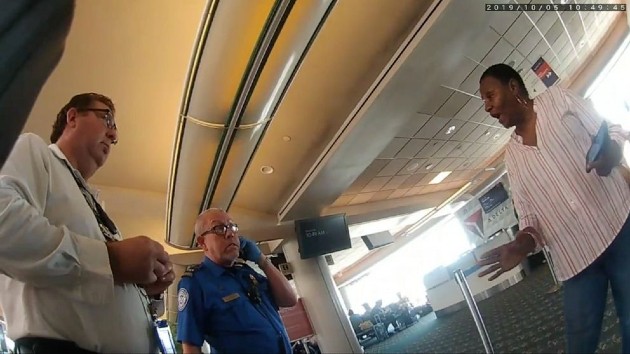 Obtained by ABC NewsBy MINA KAJI, ABC News(ORLANDO, Fla.) — A woman who was able to board a Delta flight without a boarding pass or ID bypassed the Transportation Security Administration (TSA) document checker by blending in with two families and then boarding the plane alongside a passenger with a wheelchair, according to a TSA report obtained by ABC News.The female passenger, identified by authorities as Sylvia Rictor, approached the security checkpoint at the Orlando International Airport on the morning of Oct. 5 with “an unknown family.” At the time there was another family in the adjacent lane allowing Rictor to “use the groups of people to hide her(self), circumventing security by entering the checkpoint without a boarding pass,” the report explained.Rictor and her belongings were then successfully screened by TSA, and she proceeded to the gate where she was able to pre-board the Delta flight headed for Atlanta alongside a passenger in a wheelchair. Rictor did not present a boarding pass.”I approached the woman that went around and asked if she had been scanned, and she stated yes she had,” the gate agent recalled in a written statement included in the report. “That was when I assumed she was with the wheelchair passenger and allowed her to board.”It wasn’t until passenger Jenni Clemons found Rictor in her assigned seat that people started questioning Rictor.”She just said I’m not moving,” Clemons told ABC News in October. “She never broke her gaze from the back of the seat in front of her, even when all of the authorities were speaking to her.”Authorities asked Rictor for a boarding pass and a form of government identification.”She stated she had thrown away her boarding pass after it had been scanned,” the agent wrote in a statement. She then showed her a picture on her phone “like a selfie,” according to the agent.After the agent explained that the photo was not an acceptable form of identification, Rictor replied it was “just as good,” according to a video that passenger Shannon Hire recorded of the incident.Rictor was eventually escorted off the aircraft, and the almost 200 passengers were forced to de-plane and had to be re-screened by TSA.As part of TSA’s investigation they contacted Rictor to give her an opportunity to “submit any information regarding the matter.”Rictor responded in a handwritten letter claiming that she did purchase her ticket.”I am so sorry,” she wrote in the letter included in the TSA report. “I don’t know (what) else to say but don’t blame me everything falls on your … security.”A TSA spokesperson explained that after the incident they added partitions and plexiglass to clearly delineate the security lines at the airport in an attempt to prevent a passenger from sneaking into the checkpoint again with large groups of people.In October, a spokesperson for the FBI’s Tampa Division said no charges would be filed against Rictor.The TSA report revealed Rictor had been involuntarily institutionalized on at least three separate occasions.

Alaska Airlines captain and flight attendant retire early to save their kids’ jobs
Shannen Doherty on her battle with stage 4 breast cancer: “I’ve got a lot of life in me”
Mandy Moore opens up about her difficult pregnancy: “I had a really tough 15 weeks”
Duchess Kate becomes first royal woman to help lead the Scouts
Mother of a teacher who died from COVID-19 also dies from virus, family says
Prince William says coronavirus pandemic has been a chance to ‘refocus our priorities’