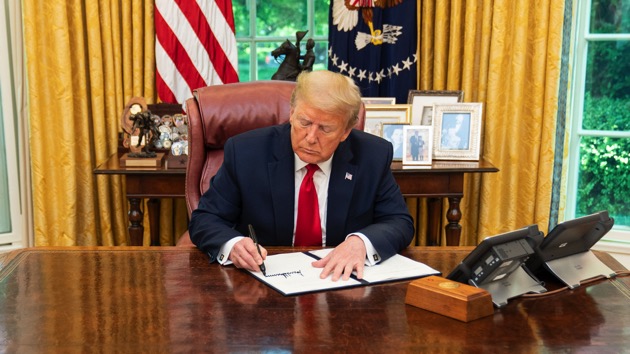 Official White House Photo by Shealah CraigheadBy JORDYN PHELPS and BEN GITTLESON, ABC News(WASHINGTON) — As Republicans and Democrats on Capitol Hill put forward their proposals on policing reforms, President Donald Trump was expected on Tuesday to sign an executive order aimed at incentivizing police agencies across the country to adopt best practices on use of force, share information about officers who engage in misconduct and respond to nonviolent calls with the help of social workers, according to senior officials in his administration.The executive action was expected to stop short of pushing for outright bans on certain behavior — like chokeholds and no-knock warrants — or call for a broader reimagining of the role of police, as many protesters across the country have demanded. It was also not expected to address the unique legal protections police officers have while doing their job.Set to be unveiled alongside representatives of police officers and the families of people killed by police, the order would prioritize federal grants for police agencies that go through a yet-to-be-defined “credentialing and certification” process aimed at training officers to adopt best practices for de-escalation, minimizing the use of chokeholds and other similar practices, according to a senior administration official.It also would encourage agencies to bring social workers along when officers respond to nonviolent calls that involve issues like mental health, homelessness and drug addiction, and it would create a “database” in which agencies would share information about officers who have engaged in misconduct, the senior administration officials said.The administration did not plan to take money away from police agencies or “do anything that would seem like we’re trying to defund” police, one official said.The officials were unclear on how racial justice issues would factor into the order, if at all, and described it as palatable to police.”I believe this executive order will have the support of all the major federal law enforcement groups in a very, very positive way,” one official said.

The families of several people whose killings have ignited protests planned to meet privately with Trump at the White House Tuesday but not attend an executive order signing ceremony scheduled for 12 noon in the White House Rose Garden, according to attorney Lee Merritt, a lawyer testifying on Capitol Hill Tuesday who is representing the family of George Floyd, a black man killed by police in Minneapolis last month. Those plans were subject to change, though, Merritt said. Among them, according to Merritt, were relatives of Ahmaud Arbery, a black man who was killed while jogging in Georgia this year; Botham Jean, a black man killed by a police officer in his own apartment in Texas in 2018; and Antwon Rose, a black teenager killed by police in 2018.

South Carolina Republican Sen. Tim Scott, the Senate’s only African American Republican who has been crafting the Senate GOP’s proposal for reforms, said Sunday on NBC’s Meet The Press that the order would involve creating “a national database on police misconduct” and address the need for “co-responders” to work alongside law enforcement in responding to mental health and addiction related issues.Ja’Ron Smith, the deputy director of the White House Office of American Innovation, led by the president’s son-in-law Jared Kushner, also emphasized the importance of co-responders in an interview with Fox News Monday morning.”What we’re looking to do is sign an executive order that will be good glue to bring community and police together. Again, invest in things like co-responders that would allow for police to do their job but bring in social workers and experts that deal with mental health and issues such as drug addiction, or alcohol addiction, or other issues like homelessness,” he said.Trump said last week that the order would “encourage police departments nationwide to meet the most current professional standards for the use of force, including tactics for de-escalation.””We’ll encourage pilot programs that allow social workers to join certain law enforcement officers so that they work together,” Trump said Thursday during a roundtable with faith and community leaders at a church in Dallas.He provided no other details at the time, but pledged that “we’ll take care of our police.””We’re going to make sure that our police are well trained — perfectly trained — they have the best equipment,” he said.On Monday, Trump defended the nation’s police, saying there were “mostly great people” in the nation’s policing system and that “we will do better, even better. We will try to do it fast.”The official said the details Scott had mentioned — a “national database on police misconduct” and the use of “co-responders” — were among the ideas being considered.”There are several principles that have been discussed,” senior Trump adviser Kellyanne Conway said. “Obviously, the president’s been listening to many different people across the aisle and across the country.”While the White House continues to condemn calls to “defund the police,” Smith pointed to the example of Camden, New Jersey — a city where the police department was effectively overhauled from the bottom up — as an example of effective police.”There’s a better way to do policing and we have great examples, you can look at Camden, New Jersey, as one of them and we’re looking at those examples as ways to bring the police and communities together and that’s going to be a strong mark for the president and for the country,” Smith said.On the legislative front, Scott said his legislative proposal will aim to improve police training and tactics but said that “qualified immunity” — a legal doctrine that shields law enforcement from liability for actions taken on the job — would be a non-starter.”The president sent the signal that qualified immunity is off the table. They see that as a poison pill on our side,” Scott said on CBS News’ Face The Nation.Scott said he would be open to the “decertification” of officers as a possible alternative to removing qualified immunity but emphasized the need to find an achievable path forward from a legislative perspective.”We’re going to have to find a path that helps us reduce misconduct within the officers. But at the same time, we know that any poison pill in legislation means we get nothing done. That sends the wrong signal, perhaps the worst signal right now in America. I think we’re going to have legislation that can be negotiated that gets us to the place where something becomes law that actually makes a difference. That’s got to be our goal,” Scott said.Congressional Democrats are moving forward with a proposal unveiled last week that calls for a ban chokeholds, move to create new standards for using force, and looks to curtail qualified immunity.