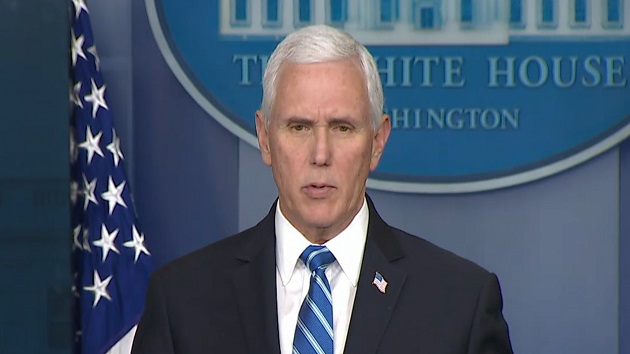 ABC News(WASHINGTON) — BY: BEN GITTLESONPresident Donald Trump this week pushed ahead with his plans to hold an indoor rally in Tulsa, Oklahoma, even as public health officials there warned novel coronavirus cases in the area were on the rise.As the president’s reelection campaign came under fire for potentially putting thousands of people in danger during the Saturday event, Vice President Mike Pence attempted to paint a rosy picture of the pandemic in Oklahoma that contradicted data released by state and local public health departments there. “Oklahoma has really been in the forefront of our efforts to slow the spread, and in a very real sense, they’ve flattened the curve,” Pence told reporters at the White House Monday.”Oklahoma is at a very low number,” Trump said.In fact, Tulsa had yet to shake the coronavirus pandemic, and the top public health official called an event like the rally “a huge risk factor.”Pence’s misleading portrayal mirrored comments he made on Monday in a phone call with governors, in which he encouraged them to echo the Trump administration’s claim that coronavirus cases were increasing across the country because the number of tests conducted have increased, according to an audio recording obtained by ABC News. The New York Times first reported on his remarks.But Pence’s claims about Oklahoma directly conflicted publicly available data and warnings from health officials there.While Pence said Monday Oklahoma had “flattened the curve” and that “the number of cases in Oklahoma” had “declined precipitously,” the daily number of coronavirus cases statewide have actually increased over the last week — even as the number of tests conducted each day has declined slightly, according to the state’s health department.In the Tulsa area specifically, the number of daily cases has also trended upward over the past two weeks, while the rate of testing has remained about the same, according to Tulsa County’s health department, which oversees the city of Tulsa and the surrounding area.While the number of people hospitalized in relation to coronavirus in the Tulsa area also ticked upward last week, it remained in the low double digits, and area hospitals had enough capacity to handle a potential surge, according to the department. Hospitalizations tend to trail the wider infection rate in an area by a number of weeks, according to experts.Tulsa’s top public health official said Saturday that the city was seeing a “significant increase in our case trends” that had resulted from events that had taken place with a large number of attendees, as well as community spread resulting from fewer people taking precautions.“COVID is here in Tulsa, it is transmitting very efficiently,” Bruce Dart, the director of Tulsa’s health department, told the Tulsa World. “I wish we could postpone this to a time when the virus isn’t as large a concern as it is today.”He said “a large indoor rally with 19-20,000 people is a huge risk factor today in Tulsa, Oklahoma.”Trump’s campaign said Monday that each guest will receive a mask and hand sanitizer and will have to undergo a temperature check before entering the venue, Tulsa’s 19,000-seat BOK Center.But it has also encouraged supporters to attend from other states, raising the possibility people could bring the virus with them from other locales where, like Tulsa, the spread is not under control.In a sign it was aware of the potential dangers, the campaign required attendees to agree to a disclaimer acknowledging “that an inherent risk of exposure to COVID-19 exists in any public place where people are present” and stating they would not hold the campaign or venue, among other groups, “liable for any illness or injury.”Neither the campaign nor the rally venue has directly engaged Tulsa County’s health department, a spokeswoman for the department, Lori Just, told ABC News on Tuesday.Tulsa Mayor G.T. Bynum, a Republican, wrote on Facebook Tuesday that he only found out about the rally after the venue asked the city for police support for the event.He said the campaign had agreed to follow the state’s coronavirus-related guidelines and that he did not plan to block the rally from taking place.”Do I share anxiety about having a full house at the BOK Center? Of course,” he wrote. “As someone who is cautious by nature, I don’t like to be the first to try anything. I would have loved some other city to have proven the safety of such an event already.”Trump and Pence have both raised the possibility they could use a different venue to accommodate crowds. “We’ve had such an overwhelming response that we’re also looking at another venue, we’re also looking at outside activities,” the vice president said in an interview with Fox News Tuesday morning.”I think we’re going to also take the convention hall next door,” Trump said Monday. Copyright © 2020, ABC Audio. All rights reserved.

Prince William says coronavirus pandemic has been a chance to ‘refocus our priorities’
Coronavirus live updates: Researchers find rapid rise in pediatric COVID-19 cases across US
Coronavirus updates: Global death toll surpasses one million
‘Dancing with the Stars’ season 29 recap: Carole Baskin lets out her last roar on the dance floor
Presidential debate: Trump, Biden face off for first time ahead of November’s election
In Pennsylvania, advantage Biden with a big boost from women: POLL