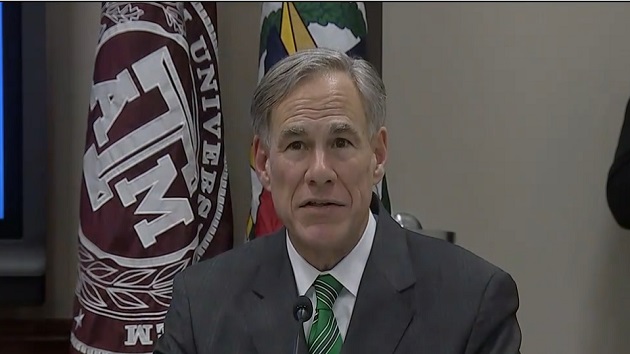 ABC News(SAN ANTONIO, Texas) — BY: IVAN PEREIRASan Antonio announced Wednesday it will mandate residents wear face coverings even as Texas Gov. Greg Abbott refused calls for stricter coronavirus precautions as coronavirus cases rise in the state.The executive order signed by Bexar County Judge Nelson Wolff says that residents over 10 years old must wear a face covering in public if they cannot maintain 6 feet of social distancing. The order, which will last until June 30, does not violate an executive order issued by Abbott that prevents local municipalities from fining or criminalizing people.Instead, “any peace officer or any person with lawful authority is hereby authorized to enforce the provisions” in the executive order, according to the court document. There will be no fines for people choosing not to wear face coverings.The executive order allows for some exemptions to the face-covering mandate, including people who are exercising, people who are eating food and motorists who are traveling with people from their household.San Antonio’s order comes as the state has seen a rise in COVID-19 cases, weeks after it eased restrictions for gatherings and businesses. San Antonio is currently allowing 50% capacity for bars and restaurants and 100% capacity for hair and nail salons, religious institutions and day camps.On June 12, the city will allow restaurants to seat 75% of their capacity.There were 2,622 new coronavirus cases and 2,518 patients in Texas hospitals as of Tuesday evening, according to the data from the Texas Department of State Health Services. Tuesday marked the sixth straight day of hospitalization increases, and the fifth day of record-setting ones, starting with 2,166 on June 12.So far, 2,029 people in the state have died from the coronavirus, according to the state health department.Bexar County had 2,018 estimated active cases and 89 related deaths as of Tuesday, according to state data.The county, which includes San Antonio, saw an increase in 436 cases on Tuesday, according to its health department. That was a record number of cases in the county by a wide margin over the previous high of 230 cases on June 13.Abbott said the rise was alarming but told the public “there is no reason right now to be alarmed,” during a news conference Tuesday.A bipartisan group of Texas mayors sent a letter to the governor Tuesday urging him to grant them the authority to mandate and enforce face coverings.”While it’s important to get our economy working again, we must also take precautions to avoid a massive influx of new cases overwhelming our hospitals,” they wrote in the letter.A representative for Abbott dismissed the mayors’ request in a statement to ABC News.