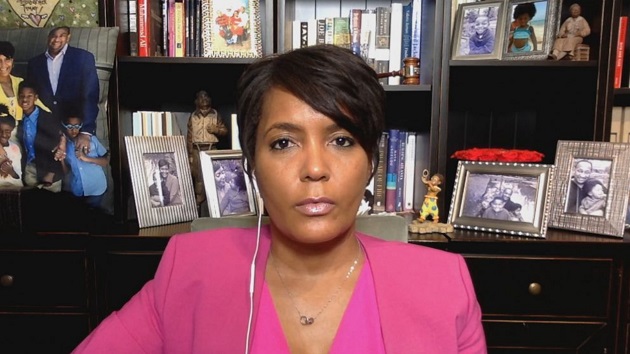 ABC News(ATLANTA) — BY: JOANNE ROSAAtlanta Mayor Keisha Lance Bottoms told “The View” Wednesday that while she’s “encouraged” by President Donald Trump’s executive order on police reform calling for the creation of a national database on officers, she said, “it’s hard to take him seriously in this moment.”The executive order is aimed at encouraging police departments across the country to adopt stricter standards regarding the use of force. The order, which calls for police departments to ban chokeholds except when an officer’s life is at risk, was signed amid pressure to take action in the wake of George Floyd’s death and, most recently, the shooting death of 27-year-old Rayshard Brooks in Atlanta.Bottoms expressed disappointment for the lack of focus on racial bias among police in Trump’s remarks Tuesday. But she agreed that there’s a need for a national database that shares information on police officers with a history of misconduct, which would prevent them from moving between different departments.”I do think that’s important as we’re looking to hire officers to see what their histories are with other agencies,” Bottoms said Wednesday. “But then Donald Trump got in the way of Donald Trump, as he always does.””We don’t have another minute to spare. We [had] convened an advisory task force in Atlanta to look at our use of force policies, and not three days later, then Rayshard Brooks was killed in Atlanta,” she added. “We don’t have time for the theatrics. We’ve gotta have action right now and we needed it yesterday.”Bottoms’ administration has been dealing with the fatal shooting of Brooks by Atlanta police officer Garret Rolfe. The incident prompted the immediate resignation of Atlanta Police Chief Erika Shields, the termination of Rolfe and new protests throughout the city.Bottoms said it was “heartbreaking” to watch the nearly 30-minute encounter, recorded on police body cameras, between Brooks and Atlanta police. She said it was “friendly,” “cordial” and “respectful” prior to his death.”But for the fact that you knew how this story ended, you could even find yourself chuckling watching this encounter. That’s how light this encounter was,” Bottoms said.The videos, released by police, show Brooks having a conversation with police in which he said he had been in the area to visit his mother’s grave and to celebrate on of his daughters’ birthdays.”It disturbed me so deeply that he just didn’t seem to be humanized in that moment,” Bottoms said.Bottoms said she believes there was “an opportunity” for Brooks’ encounter with Atlanta police “to end very differently” if they had responded with a stun gun instead of deadly force.”We’ve got to train our officers differently. We have to encourage our officers to de-escalate a situation with reasonable objectivity,” she said. “I understand there’s a lot of frustration in this country on both sides, but at the end of the day, this incident in particular, and with George Floyd and so many others, it didn’t have to happen this way and end this way.”Bottoms has found herself on presumptive Democratic nominee Joe Biden’s shortlist for running mate in the presidential election. However, between seeing her city through the coronavirus pandemic and handling the protest movement, she says being the potential vice president isn’t on top of her mind.”I can tell you I’m thinking about it a lot less,” she said, noting, however, that she wants him to win, “point-blank.””What’s most important during this election is that we have a restoration of moral leadership in our nation’s capital because it impacts everything,” Bottoms said. “It impacts how we view our country, how we view the future for our children.””I trust that [former] Vice President Biden is going to make the choice of the person who’s gonna be able to best help him lead our country,” she added. “I think it’s going to be important whomever that person is, who may be able to govern alongside Vice President Biden that they be able to bring some integrity and compassion and empathy for our communities who are hurting in so many ways.”