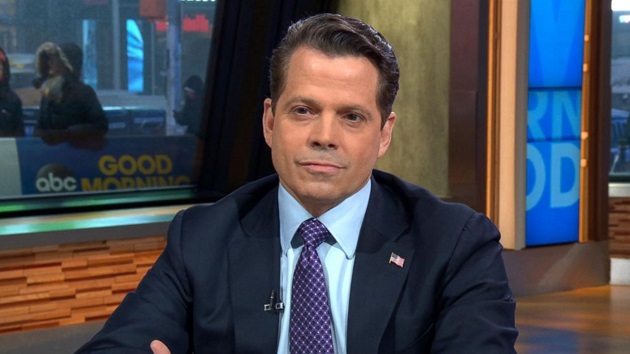 ABC News(WASHINGTON) — BY: JOHN VERHOVEKA group of several prominent Republican operatives, which includes former White House Communications Director Anthony Scaramucci, have launched a new super PAC, Right Side PAC, that aims to target anti-Trump Republicans and turn them out to vote for former Vice President Joe Biden.”I think we’re looking for Republicans who have soured on the president. People who voted for Donald Trump in 2016 who don’t intend to do it this time,” Matt Borges, a former chairman of the Ohio Republican Party who also worked in President George W. Bush’s administration and on Arizona Sen. John McCain’s 2008 presidential campaign, told ABC News. Other veterans of the McCain and Bush campaigns are expected to participate in the group’s effort, but Borges did not mention any specific names.The group is targeting disaffected GOP voters in they key battleground states of Arizona, Florida, Michigan, North Carolina, Pennsylvania and Wisconsin with a focus on data gathering and turnout efforts. Borges says the group is not planning on running any television or radio ads as part of their efforts.The new effort comes amid the ongoing push by groups like the Lincoln Project and Republican Voters Against Trump, also run by GOP operatives who are now seeking to unseat Trump and boost Biden, to court disaffected Republicans that may have drifted away from the party during Trump’s presidency.Distinguishing themselves from those anti-Trump GOP-aligned, Borges says Right Side PAC’s main aim is to target GOP voters who may still vote Republican down ballot, but have turned away from Trump and see Biden as a palatable alternative who is not “radical.””The truth is [Biden] is really not a radical leftist. He’s not supporting this ‘Defund the Police’ craziness. He’s never been for Medicare for All and on top of that, most importantly, he’s just a good person, at a time when our country probably really needs that,” Borges said.Scaramucci, who served as White House Communications Director in the Trump White House for less than two weeks during the summer of 2017, has been a vocal critic of the president leading up to the 2020 election and is advising Right Side PAC’s efforts and is expected to use his social media platforms to amplify the group’s message, Borges said.The group still faces a considerable challenge in turning a significant number of GOP voters out to vote for a Democrat on the presidential level.While anti-Trump forces within the GOP existed during the 2016 election, President Trump won Republican voters by 80 points over Democratic nominee Hillary Clinton, according to exit polls.