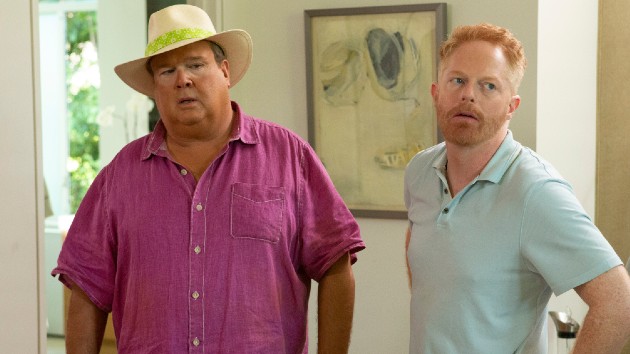 ABC/Gilles Mingasson(LOS ANGELES) — While the sitcoms Fresh Off the Boat and Modern Family have sailed into the sitcom sunset, the ABC shows could spawn spin-offs, Deadline is reporting.

Fresh Off the Boat centered on the Huang family, Taiwanese-Americans who moved from Washington, D.C. to Florida.  It was based on the life of Eddie Huang, a high schooler in the show who in real life became a star chef, author, and restaurateur, in addition to a producer of the show.

The spin-off, tentatively called Magic Motor Inn, would have centered on an Indian-American family, the daughter of which attended school with Eddie.

In a chat with the trade, ABC Entertainment President Karey Burke explained that a potential Fresh Off yhe Boat spin-off idea “did not ultimately come together,” but the trade reports there’s still “enthusiasm” for an idea.

As for Modern Family, a spin-off would reportedly center on Cam and Mitch, a married gay couple played by Eric Stonestreet and Jesse Tyler Ferguson, respectively.  Back in March, Modern Family co-creator Steven Levitan told Deadline, “I don’t want to say it’s a long shot, it’s under discussion, but we’ll see.”

Co-creator/executive producer Christopher Lloyd added, “doing a spinoff is fraught in a lot of ways, and we won’t do it unless we feel confident there’s something there … particularly because Modern Family is a tough act to follow.”

That being said, Deadline says, “the network and the studio remain high on the idea.”

ABC has had great success spinning off its newer shows.  grown-ish, on Freeform, was spawned from ABC’s groundbreaking black-ish, and The Conners was born from the controversial canceling of the Roseanne reboot, which was axed after Roseanne Barr tweeted a comment widely considered to be racist.