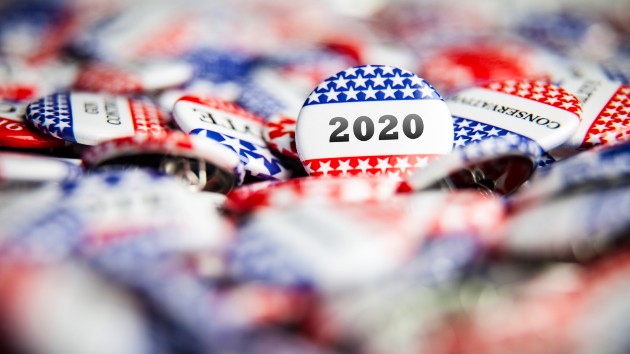 adamkaz/iStockBy KENDALL KARSON and JOHN VERHOVEK, ABC News(WASHINGTON) — Democrats at the national and state level are launching a coordinated counter-programming offensive on Friday, ahead of President Donald Trump’s rally this Saturday in Tulsa, Oklahoma, his first since the coronavirus pandemic shut down the campaign trail.The Democratic National Committee and presumptive Democratic nominee Joe Biden’s campaign, in concert with the Oklahoma Democratic Party, are planning a series of organizing events and employing a number of tactics aimed at underscoring Trump’s vulnerabilities with the African American community to undermine his pitch to the crucial voting bloc for Democrats. “Nothing Trump says in Tulsa or at any of his other rallies will distract Americans from his ineffective leadership that’s cost us jobs and lives — and wherever he goes, Democrats will be there to hold him accountable,” said David Bergstein, the battleground state communications director for the DNC.The Biden campaign is holding organizing events on Friday to commemorate Juneteenth across nine battleground states, according to a DNC aide, which could ultimately tilt the outcome of November’s general election in the former vice president’s favor.The grassroots efforts to bolster Biden’s campaign will be held in Colorado, Florida, Michigan, North Carolina, New Hampshire, Ohio, Pennsylvania, Virginia and Wisconsin — outlining the likely battlefield Democrats believe will deliver them a path to the White House.”Vice President Biden and our campaign will be honoring Juneteenth through community action — because we know that the best way to defeat Donald Trump is by coming together and doing the work to restore the soul of our nation,” said Ashley Allison, national coalitions director for the Biden campaign.The joint effort comes after the Biden campaign announced on Thursday the launch of a six-figure investment in African American print, radio and targeted digital programming in six key swing states that began on Friday as part of its first major advertising blitz of the general election.African American voters were a central part of the coalition that ultimately delivered Biden the Democratic nomination this year, starting with his blowout victory in the South Carolina primary in February, the first contest where black voters comprised a majority of the Democratic electorate. The former vice president went on to sweeping victories across the South, his support buttressed by consistent support from the African American community.Biden himself is joining Faith for Black Lives JusticeCon, a virtual social justice conference, alongside Sens. Kamala Harris, D-Calif., and Elizabeth Warren, D-Mass., Congresswoman Val Demings, D-Fla., and Rev. Al Sharpton.National Democrats’ full-court press on Juneteenth is also expected to include a press call with national and Oklahoma surrogates to highlight the public health risks of Trump’s rally amid the coronavirus pandemic, and what they see as his failed record for African Americans, particularly, his response to the crisis, the unemployment rate and his inflammatory rhetoric, the aide said.The DNC War Room, the rapid response arm within the committee, is also aiming to target Trump with the same line of attacks throughout the day, including what they see as his irresponsibility for holding the rally in the first place.The DNC aide also says its rapid response operation plans to “fact check” Trump’s rally in real-time.On the ground, the DNC is also rolling out a full-page newspaper ad campaign in The Oklahoma Eagle, a historic black-owned newspaper in Tulsa, to greet him with his own words from 2016.The ad, which will run for a week, references Trump’s “what do you have to lose” comments that he invoked consistently throughout his 2016 election.”What do you have to lose by trying something new? I will fix it,” he said at a rally in August 2016. “This means so much to me, and I will work as hard as I can to bring new opportunity to places in our country, which have not known opportunity in a very long time.”State Democrats are also coordinating a counter-programming push with Alicia Andrews, the first African American to chair the Oklahoma Democratic Party, authoring an op-ed and hosting a press event on Friday morning in the state.Trump’s rally, which marks his official return to the campaign trail since the onset of the coronavirus in March, was initially scheduled for Friday, June 19, known as Juneteenth, the anniversary marking the day when the last people who were still enslaved were told they were freed, more than two years after the Emancipation Proclamation ended slavery.But in a rare reversal, the president announced last week that he is rescheduling the rally for the next day. Still, the rally is taking place in a state that is seeing a rising number of cases of the coronavirus, which led to multiple health experts pushing back against the event, saying it could supercharge the spread of the coronavirus.Trump campaign spokesperson Erin Perrine told ABC News the campaign “takes the health and safety of rally-goers seriously and is taking precautions to make the rally safe,” including checking the temperatures of attendees and providing them with face masks and hand sanitizer.But Democrats are eager to underscore the pushback against Trump’s rally — even from some Republicans.”Everything about this event — from the timing to the defiance of health guidelines — has been a disaster, which is why it’s already been condemned by Tulsa’s Republican mayor,” Bergstein said. “Ever since he got into office, Trump’s speeches and political events have done one main thing: repulse the coalition of voters who decide elections in the battlegrounds.”Earlier this week, Mayor G.T. Bynum, who did not explicitly condemn the rally, wrote in a lengthy Facebook post, “Was the nation’s first large campaign rally after the arrival of COVID-19 my idea? No…Do I share anxiety about having a full house at the BOK Center? Of course.””As someone who is cautious by nature, I don’t like to be the first to try anything,” he continued.

Bynum said on Thursday he is not attending the rally.Even as the president’s re-election campaign moves forward with the rally, Tulsa has called off its own Juneteenth celebration this year to prevent the spread of COVID-19.Trump’s rally also comes as the city grapples with not only the current coronavirus crisis but also its painful past of racial violence.This year, Tulsa is marking the 99th anniversary of the 1921 Tulsa Race Massacre, when a white mob attacked black residents, burning and completely destroying black homes and businesses in a prosperous black district.The focus on the African American community is paramount for Democrats — who are relying on the voting bloc to not only overwhelmingly support Biden in the fall, but turn out in far higher numbers than they did in 2016.The DNC’s efforts will also run counter to Trump’s long-standing efforts to court the black vote.Four years ago, Trump won only 8% of the black vote, according to national exit poll data, only two percentage points higher than former Republican nominee Mitt Romney’s 6 percent in 2012.In November of last year, he stopped in Atlanta to launch a “Black Voices for Trump” coalition — an effort to coalesce what is usually a dedicated Democratic-leaning voting bloc around his re-election campaign.”We’ve done more for African Americans in three years than the broken Washington establishment has done in more than 30 years,” he said at the launch. “We’ve created 6.7 million new jobs since the election…Last month, the African American unemployment rate reached the lowest level ever recorded in the history of our country.” Copyright © 2020, ABC Audio. All rights reserved.