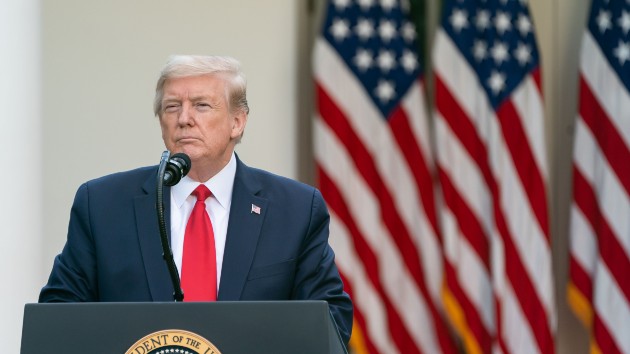 Official White House Photo by Andrea HanksBy CATHERINE THORBECKE, ABC News(WASHINGTON) — President Donald Trump’s manipulated video blasting “Fake News” on Twitter, has been labeled as fake news by the social media platform. The video tweeted by the president purports to show a black toddler running away from a “racist” white toddler at the beginning with a doctored “CNN” chyron at the bottom. It then cuts to show that the toddlers actually ran toward each other to share a hug before scurrying off together. “America is not the problem, Fake News is,” the all-caps text says on screen at the end. “If you see something say something. Only you can prevent fake news dumpster fires.”

The post has been hit with a “Manipulated media” warning label by Twitter that takes users to a landing page with more information. “Multiple journalists confirmed that the video, which was shared by President Trump, is edited and features a fake CNN chyron,” the page states. “This Tweet has been labeled per our synthetic and manipulated media policy to give people more context. More on our policies and approach here,” a Twitter spokesperson told ABC News Friday.There are many indications the clip is inauthentic — the first banner reads “Terrified todler [sic] runs from racist baby,” with toddler misspelled.The video Trump shared is a clip of a heartwarming story that went viral in September 2019 about a pair of 2-year-old “besties” greeting each other.It was widely reported on, including by CNN, which ran the video under the headline: “These two toddlers are showing us what real-life besties look like.”White House Deputy Press Secretary Judd Deere responded to the social media giant’s labeling, saying in a statement, “If Twitter is not careful, it’s going to have to label itself a ‘manipulator."” This is not the first time a tweet from the White House has been labeled as “manipulated media.” Last month, a separate Tweet from Trump with misleading claims about mail-in ballots was slapped with a fact-checking label by the platform. The president did not take it well, and responded at the time by threatening that Republicans will try to “close” down social media platforms that “silence conservative voices.”Copyright © 2020, ABC Audio. All rights reserved.