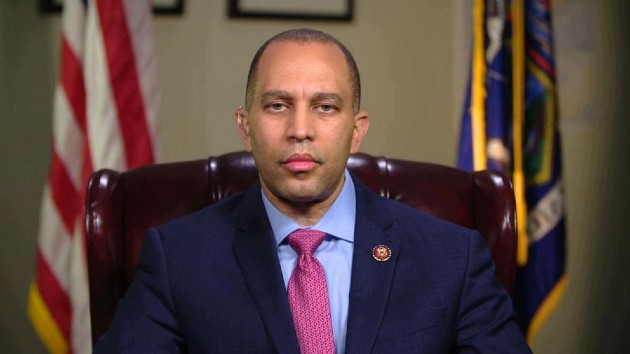 ABC NewsBy ADIA ROBINSON, ABC News(WASHINGTON) — The chairman of the House Democratic Caucus called President Donald Trump’s former national security adviser John Bolton a “political opportunist and a profiteer.”And while Bolton was criticized for not testifying during Trump’s impeachment, the leading Democrat also said he hopes to hear testimony from the recently fired U.S. attorney for the Southern District of New York, Geoffrey Berman. Bolton “had the opportunity to step forward and participate in the House impeachment inquiry and share any information that he had about wrongdoing by President Donald Trump and other members of his administration, and he declined,” Rep. Hakeem Jeffries, D-N.Y., said on ABC’s This Week Sunday.”He also could have stepped forward in the midst of the Senate impeachment trial, but he ran and hid. That’s unfortunate,” Jeffries told ABC News Chief White House Correspondent Jonathan Karl.In an exclusive interview with ABC’s Chief Global Affairs Correspondent Martha Raddatz, Bolton said Trump is not “fit for office.”Bolton, in that same ABC News interview, also discussed an episode from his forthcoming memoir, The Room Where It Happened, in which he said Trump previously floated the idea of intervening in the Southern District of New York related to its investigation of a state-owned Turkish bank.”I don’t think I know enough about all the circumstances, but I tell ya, it did feel like obstruction of justice to me,” Bolton told Raddatz about the December 2018 incident.Democrats have criticized Bolton for refusing to testify before the House impeachment hearings last fall. Instead, Bolton offered to speak before the Senate if subpoenaed, but the Republican-controlled body declined to hear from witnesses in the president’s trial.On This Week, Jeffries said the Senate “committed malpractice,” by acquitting Trump.”Now it’s in the hands of the American people,” he said.Karl asked if the new allegations from Bolton’s book are impeachable offenses. The congressman, who served as an impeachment manager, said the House litigated the question of impeachment.”Donald Trump is impeached and forever will be,” Jeffries said. “We had a trial in the Senate, that wasn’t functionally a trial, because, unlike any other impeachment trial in the history of the Republic, the senators declined to call a single witness. They declined to issue a single subpoena. They declined to review a single document.”Jeffries, a member of the House Judiciary Committee, also commented on Berman’s ouster, saying that he hopes the former U.S. attorney will testify before the committee.”I think he has a lot to say about the continuing pattern of chaos, crisis and corruption that we have seen from the Trump administration,” he said.Berman said Saturday evening that he would leave his post “effective immediately,” after previously resisting Trump administration efforts to fire him out of concern for ongoing investigations. He agreed to depart his post when U.S. Attorney General William Barr named Deputy U.S. Attorney Audrey Strauss as acting U.S. attorney, instead of his original, handpicked replacement U.S. Attorney for the District of New Jersey, Craig Carpenito.During his tenure, Berman conducted several politically sensitive investigations, including the case against Trump’s former personal attorney Michael Cohen. His office is believed to still be investigating the president’s current personal attorney Rudy Giuliani for his contacts with Lev Parnas and Igor Fruman, as ABC News has previously reported.”That’s why Chairman (Jerry) Nadler has indicated, with the full support of Speaker (Nancy) Pelosi, that we are going to have this hearing on political interference between the White House and the Department of Justice and present the facts to the American people and take it from there,” Jeffries told Karl on Sunday.