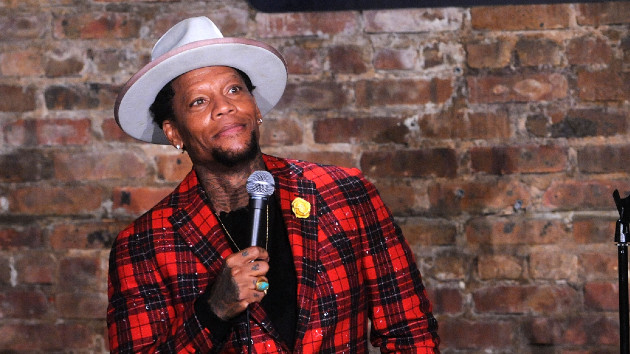 Bobby Bank/Getty Images(NASHVILLE) — Comedian D.L. Hughley is on the mend after collapsing on stage during a show in Tennessee.  The 57-year-old also revealed that he tested positive for COVID-19.

The incident happened Friday night, with the Zanies comedy nightclub announcing on Facebook, “Our friend D.L. Hughley had a medical emergency while performing on Friday and was hospitalized overnight. According to his publicist, he was suffering from exhaustion after working & traveling this week.”

The club continued, “He is feeling better and thanks everyone for their kind thoughts.”

Later on Saturday, 57-year-old opened up about the harrowing experience on Twitter.  Hughley, speaking in a subdued voice, candidly explained that he was “very dehydrated” and suffering from “extreme exhaustion.”

“I also tested positive for COVID-19, which blew me away,” Hughley announced in a serious tone.  “I was what they call asymptomatic. I didn’t have any symptoms, the classic symptoms.”

The comic made sure to detail the symptoms of COVID-19 — such as a low-grade fever, difficulty breathing or a cough — in order to educate fans on what they should be on the lookout for and take seriously.

“I still don’t have a fever, I didn’t have a loss of smell or taste,” He deadpanned. “Apparently, I just lost consciousness!”

The Hughleys star furthered that, “So, in addition to all the other stuff you have to look out for, if your a** pass out in the middle of a show, onstage, you probably need to get tested.”

Hughley will now quarantine in his hotel room for 14 days.

Zanies has since urged those who attended Hughley’s Friday show to get tested.  The club separately announced on Sunday that, in accordance with Metro Nashville Health Department guidelines, the institution will remain closed until “a comprehensive cleaning process conducted by a specialist” is completed.