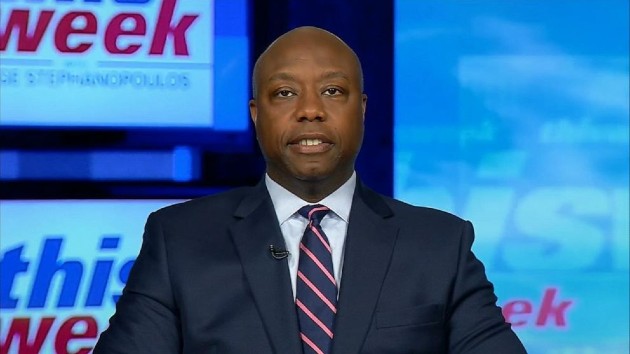 ABC NewsBy ADAM KELSEY, ABC News(WASHINGTON) — Though conservatives nationwide continue to condemn progressive-led calls to “defund the police” as part of the effort to reform law enforcement in the wake of George Floyd’s killing, the Senate’s lone Black Republican explained Sunday how his new bill leverages federal money in an attempt to push agencies to make use-of-force changes.”It is important for us to use the resources that we provide law enforcement in a way to get them — to compel them towards the direction that we think is in the best interest of the nation, of the communities that they serve, and frankly of the officers themselves,” said Sen. Tim Scott in an interview on ABC’s This Week.Scott, R-S.C., is the author of the “Justice Act,” the GOP-backed police reform legislation introduced this week. The bill, which the White House has signaled has President Donald Trump’s support, provides incentives for police departments to curb controversial practices, such as chokeholds, but does not explicitly prohibit them, as a Democratic-led House bill does.On This Week, Scott told ABC News Chief White House Correspondent Jonathan Karl that he disagreed with an online magazine that characterized the potential monetary withholdings in his legislation as similar to what “defund the police” supporters are seeking. Instead, he argued that, unlike the House bill, the leveraging of federal funding could lead to changes in jurisdictions in which Congress cannot enforce mandates.”We all want to ban chokeholds. We both know — the House knows and the Senate knows that you can’t ban local use of chokeholds or state use of chokeholds, except to compel behavior by the federal grants that come into play,” Scott said. “And by removing those federal grants, you actually position those departments to change their behavior, change their policy, in the direction of satisfying what we all know… is (an) unnecessary tactic except for saving the life of the officer.”Despite Democrats, including Senate Minority Leader Chuck Schumer, D-N.Y., raising concerns about the scope of the bill, Senate Majority Leader Mitch McConnell, R-Ky., pledged that he would fast-track the legislation and attempt to begin debate on the bill this coming week.Scott’s unique perspective within his party has placed him at the forefront of reform efforts in recent weeks, as racial unrest has gripped the nation following deaths of Floyd in Minneapolis, and of Rayshard Brooks in Atlanta.But it has also led to disagreements between the senator and Trump over the president’s rhetoric relating to the issues, something Scott made no secret of on This Week when asked by Karl about the recent resignation of Mary Elizabeth Taylor, one of the highest-ranking African American officials in the administration who served as assistant secretary of state for legislative affairs.”In her letter of resignation she writes: ‘the president’s comments and action surrounding racial injustice and Black Americans cut sharply against my core values and convictions, I must follow the dictates of my conscience and resign,"” Karl said, asking Scott, “Have you ever felt that way? That his actions cut sharply against your core values and convictions?””The president has said things that I have found offensive. I’ve spoken out against those things publicly, and I also called him and we had constructive conversations,” Scott said.”Here’s what I say: I think Mary Elizabeth is a wonderful person. Brilliant. She has an incredibly bright future. She’s following her convictions,” he continued, noting that his own convictions have led him to work with the president on initiatives targeting the Black community, such as “opportunity zones” and increased funding for historically Black colleges and universities.During his appearance on This Week, Scott was also asked about the revelations about Trump included in a new book by former national security adviser John Bolton. In response, the senator said he would have preferred they had been discussed during congressional testimony, as opposed to a medium through which Bolton is enriching himself.”I do wish that Mr. Bolton would have come into the House under oath and testified,” Scott said. “The problem is that when you’re selling it in a book, you’re not putting yourself in a position to be cross-examined. So for $29.95 he can monetize his national security clearance, but under oath he would have had an opportunity to answer questions, and not just make assertions.”Bolton declined to testify in the House hearings, but had offered to speak before the Senate if subpoenaed. The Republican-controlled body declined to hear from witnesses in the president’s trial.”It would have been good for him to come to the House, answer the questions under oath and be cross-examined, so that we would have more information about fact patterns that he suggests are true,” Scott continued. “So far it looks like he’s monetized it more than he has actually provided a fact pattern.”