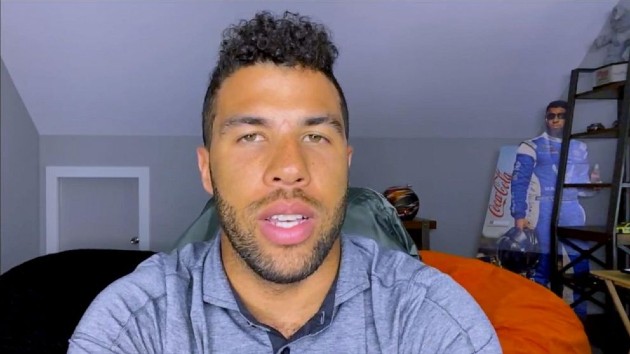 ABC NewsBy MEREDITH DELISO, ABC News(LINCOLN, Ala.) — NASCAR said Sunday it has launched an investigation after a noose was found in the garage stall of a black driver who had called for removing the Confederate flag from league events.”We are angry and outraged, and cannot state strongly enough how seriously we take this heinous act,” NASCAR said in a statement. “As we have stated unequivocally, there is no place for racism in NASCAR, and this act only strengthens our resolve to make the sport open and welcoming to all.” The organization said it would “do everything we can to identify the person(s) responsible and eliminate them from the sport.”The incident happened at Talladega Superspeedway in Lincoln, Alabama. NASCAR said the noose was found in the garage stall of the 43 team. The 43 car is driven by Bubba Wallace, 26, the only black driver in the Cup Series, NASCAR’s highest level.Wallace responded to the incident on Twitter Sunday night.”Today’s despicable act of racism and hatred leaves me incredibly saddened and serves as a painful reminder of how much further we have to go as a society and how persistent we must be in the fight against racism,” he said.

Wallace had pushed for the racing league to ban the display of the Confederate flag amid calls for racial justice following George Floyd’s death last month at the hands of Minneapolis police. NASCAR subsequently announced earlier this month that it was banning the presence of the controversial flag at all events.In his statement Sunday, Wallace said he has been “overwhelmed” by the support from fans and that “we will not be deterred by the reprehensible actions of those who seek to spread hate.””This will not break me, I will not give in nor will I back down,” he said. “I will continue to proudly stand for what I believe in.”Ahead of the Cup Series race on Sunday, protesters were seen flying Confederate flags in a parade outside Talladega Superspeedway. A plane also flew a banner of the flag with the words “Defund NASCAR.”The race, the first during the coronavirus pandemic to have fans in attendance, ended up being postponed to Monday due to inclement weather. Copyright © 2020, ABC Audio. All rights reserved.