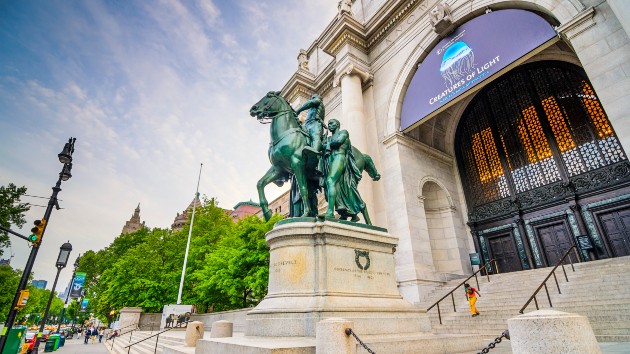 SeanPavonePhoto/iStockBy MEREDITH DELISO, ABC News(NEW YORK) — A statue of Theodore Roosevelt outside the American Museum of Natural History in New York City that has been criticized for symbolizing colonialism and racism will be removed, the city announced Sunday.The statue, which is owned by the city, was unveiled in 1940 and sits on public park land outside the museum’s Central Park West entrance. The memorial features Roosevelt on horseback with a Native American man and an African man by his side.”The American Museum of Natural History has asked to remove the Theodore Roosevelt statue because it explicitly depicts Black and Indigenous people as subjugated and racially inferior,” Mayor Bill de Blasio said in a statement. “The City supports the Museum’s request. It is the right decision and the right time to remove this problematic statue.”In a statement on its website, the museum, which is currently closed due to the coronavirus pandemic, said the statue has “long been controversial because of the hierarchical composition that places one figure on horseback and the others walking alongside, and many of us find its depictions of the Native American and African figures and their placement in the monument racist.”The museum said a city commission considered removing the statue in 2017 and 2018 but didn’t reach a consensus. The city “directed that it should stay in place with additional interpretation and context to be provided by the Museum,” the statement said.Last year, the museum debuted an exhibition on the statue’s history and modern-day reactions, but that “in the current moment, it is abundantly clear that this approach is not sufficient.”

The Equestrian Statue in front of the Museum has long been controversial for the racial hierarchy it depicts. The Museum has asked that it be moved. More: https://t.co/3hgIWe0fqu pic.twitter.com/m99Bl1EEFT

Roosevelt served as New York governor before becoming the 26th U.S. president. In a statement to the New York Times, one of his descendants expressed approval of the decision to remove the monument.”The world does not need statues, relics of another age, that reflect neither the values of the person they intend to honor nor the values of equality and justice,” Roosevelt’s great-grandson, Theodore Roosevelt IV, said. “The composition of the Equestrian Statue does not reflect Theodore Roosevelt’s legacy. It is time to move the statue and move forward.”It is not yet known when the statue will be removed or where it will go, the Times said. The museum is naming its Hall of Biodiversity after Roosevelt, according to the Times.Protests over the death of George Floyd while in police custody last month have brought greater attention to statues that are associated with racial injustice, from monuments of Confederate generals to the explorer Christopher Columbus.In that vein, New York City announced on Friday that it is considering reviewing monuments to historic figures, including George Washington and Thomas Jefferson.Following the announcement of the Roosevelt statue’s removal, New York State Assemblywoman Nicole Malliotakis said on social media, “First, they go after our Nation’s Founding Fathers — Washington and Jefferson — in City Hall. Now TR??!! This is insanity and it has to stop now.” Copyright © 2020, ABC Audio. All rights reserved.