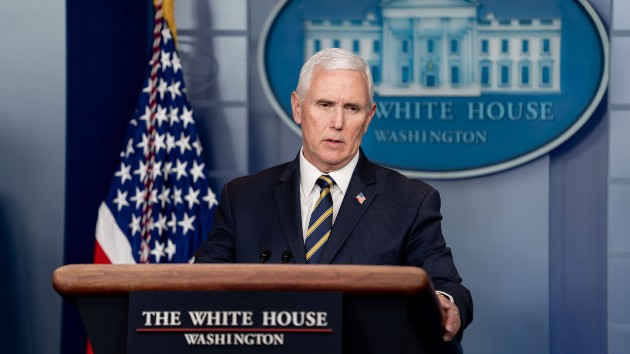 Official White House Photo by D. Myles CullenBy KATHERINE FAULDERS, OLIVIA RUBIN, SOO RIN KIM and LAURA ROMERO, ABC News(WASHINGTON) — Vice President Mike Pence warned on Monday that young people across the country are increasingly testing positive for coronavirus, a trend that’s been worrying experts as nearly half the states in the nation are now reporting overall increases in infections.”We are seeing more people test positive under the age of 35, particularly in our discussions with the leadership in Florida and in Texas,” Pence said on a conference call with state governors Monday, according to audio of the call obtained by ABC News. “The better part of half of the people that are testing positive in the new cases are people under the age of 35… so we’re working with those states and supporting measures that are being taken to address those issues in an appropriate way,” he added.Governors in Arizona, Florida and Texas, which have all seen major increases in coronavirus cases since reopening started, also discussed the rise in infections in younger demographics in their states.Florida Gov. Ron DeSantis called the shift “significant” and “unmistakable,” and acknowledged that young people were “definitely transmitting it more than other segments of the population.””When we started on May and March, our median age of a new case was 65. It was 50 throughout most of probably mid April and May,” DeSantis said on the call, “and now our median age last week was 35 for all our new cases. So you know we saw a lot of new cases disproportionally in the younger bracket.”But DeSantis questioned whether an increase in disease spread was truly driving up the number of positives, or if it could be attributed to an increase in testing.

“Whether it’s a shift and they’re getting infected more, or whether it was there all long we just weren’t seeing it, maybe a little bit of both, but that’s been the biggest trend that we’ve seen in the state of Florida,” DeSantis said.Dr. Deborah Birx, the White House coronavirus response coordinator, praised the notion young people are getting tested more, calling it “terrific.”In a Saturday press conference, DeSantis maintained that the overall increased number of positive COVID-19 infections, which on Monday passed 100,000, was because of increased testing.Texas Gov. Greg Abbott said his state had zoned in on two possible factors facilitating the spread among the younger population: bars and high school and college sports.”We have found that some bars are not following those rules and are crowded just like they were before the pandemic occurred,” Abbott said, a revelation which has lead his alcoholic beverage commission to shut them down for 30 days “to try to send a message.””We will continue to dig into it, we will use testing strategies to make sure that we are able to target the areas of groups that are more highly inclined to test positive,” Abbott said.Pence said while they are carefully watching the increase in these cases, they are keeping “even more careful eyes” on hospital capacity and deaths, which he said remain low.Prior to the call, experts pointed to higher infection rates among younger people and a lack of social distancing as one suspected driver of the worrying increase of cases in nearly half of U.S. states.In California, as much as 44% of new positive coronavirus cases are among people under 35, according to an internal Federal Emergency Management Agency (FEMA) memo obtained by ABC News.And while the California Public Health Department also attributed some of the shift to the increase in testing availability in the state — it is not as hindered by the severe shortages that limited testing to vulnerable populations for much of the pandemic — an uptick in cases in younger demographics has been observed in numerous states and counties across the country, according to local government and hospital officials.Dr. Helmut Albrecht, an infectious disease specialist and the chair of Internal Medicine at Prisma Health in South Carolina, told ABC News the number of cases in that state among 20- and 30-year-olds has doubled from May to June. Ninety percent of the increases there are in people under the age of 50, Albrecht added, in what he said illustrated a “clearly disproportionate impact.”Increases like this cannot be explained away by an increase in testing, experts agreed, noting that young people have a responsibility to continue social distancing for the health of their families and community.”I give the kids a pass, but there are too many people out there who should know better,” Albrecht said. “There’s a big movement out there in younger generations, lets get this over with — be careful what you wish for.”Mayor Chokwe Antar Lumumba of Jackson, Mississippi, echoed the same concerns about younger people spreading the virus as the more densely populated metropolitan Jackson area continues to see increases in cases and hospitalizations. In Mississippi, the daily increase in cases has mostly remained flat, but hospitalization has been showing an upward trend, especially in the Jackson metropolitan area.”You do see people with masks in many, many places, but then there is a thought amongst a younger demographic that because certain facilities are opening up, that somehow we’ve gotten past the coronavirus,” Lumumba said. “And based on the numbers, there is nothing to indicate such.””In fact, the director of the state department of health was just reiterating how younger people appear to be carriers, and they are bringing it to their elders,” Lumumba said.For some, the rising numbers are no surprise. Photos of those in younger generations crowding beaches and overflowing bars have horrified some experts for weeks, but they are now urging it is taking a real toll.Matthew G. Heinz, and internist at Tucson Medical Center in Arizona, told ABC News he has admitted “many 20-, 22-, 26-year-old’s in the past couple of days” to his hospital.”When the state reopened, it’s almost like the parents are gone, like the professor’s out of the room,” Heinz said. “I’ve also seen younger ride-sharing drivers, it’s been a trend in my hospital. They drive around picking up strangers who touch their cars, who are way closer than 6 feet apart. They can’t stay safe.”And while experts are seeing younger adults admitted, they note that it may not drive up the death rate as significantly. “The case fatality rate will go down as cases get younger,” Dr. Andrew Noymer, a public health professor at University of California Irvine, told ABC News. “I don’t know if it’s good or bad — it is what it is.”Abbot highlighted the states’ low death rate on the call on Monday.

“Amazingly our death rate in Texas remains below two percent,” Abbot said, “and I don’t know if it’s because we do have a large percentage of the people testing positive who are younger, or it it’s some other reason, but the good news is our net rate is low.”On a call with governors last week, Birx raised the idea that cases of the disease across the country also appear to be “less severe” than they were earlier in the pandemic, though it was unclear yet as to why.”So either we’re gotten increasingly better at knowing precisely what to do with [oxygen] therapy and all the ability to have Remdesivir and plasma, or there is a shift happening,” Birx said. “So we don’t have the molecular data yet that suggests that there’s a change in the virus itself but we’re hearing that across the country that the cases are milder.”Dr. James McDeavitt, senior vice president and dean of Clinical Affairs at Baylor College Medicine in Houston, told ABC News a similar trend is happening there: hospital admissions have continued to grow since after reopening, but ICU bed occupancy has flattened to grown at a slower rate, an “unusual” trend that suggests disease is less severe.”And a theory is that perhaps older people are doing a better job of social distancing,” McDeavitt continued. “They may be staying home in greater numbers and perhaps we’re seeing a younger population admitted to the hospitals, she said. We don’t know that. But that’s one of the areas that we’re looking at right now.”Noymer, the professor in California, said he is closely watching the death rate, which he called an important but “lagging indicator.” It can often take around three weeks before deaths from coronavirus are known, to see if it rises. While numerous factors can prevent the death rate from going up, younger cases can definitely have an effect.”All things go hand in glove,” Noymer said. “It’s all related.””The epidemic is evolving and its changing, definitely,” he added. “We are seeing a much more lenient case fatality rate in recent weeks.”If the death rate doesn’t go up, Albrecht said it would be “a silver lining in a progressively darkened scenario.” Copyright © 2020, ABC Audio. All rights reserved.