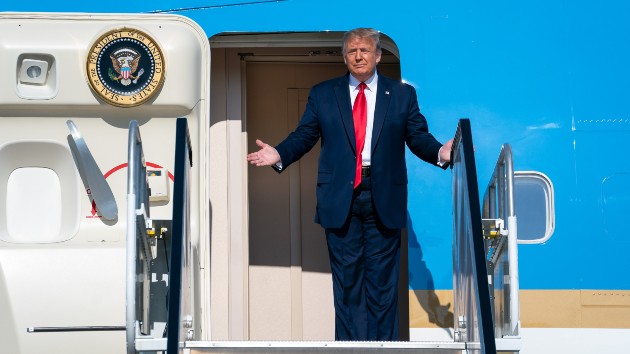 Official White House Photo by Tia DufourBy WILL STEAKIN and BENJAMIN SIEGEL, ABC News(WASHINGTON) — For the second time in less than a week, President Donald Trump will travel to a state fighting a surge in COVID-19 cases and address supporters at a large, indoor gathering opposed by local officials and health experts where coronavirus safety protocols may not be followed.Trump on Tuesday will headline a convention for Students for Trump, a pro-Trump group not officially a part of the Trump campaign, in Phoenix, Arizona, after making several stops in Yuma, Arizona related to border security and the U.S.-Mexico border wall. Organizers are expecting roughly 3,000 conservative activists to attend the event at a Phoenix megachurch. Attendees will be asked, but not required, to wear masks.”We are asking people to be responsible citizens, so while we won’t tackle people in the pews if they aren’t wearing [masks], we will be asking folks to be respectful of local ordinances and rules,” Andrew Kolvet, a spokesman for the Students for Trump convention, told ABC News.Other common safety practices, including social distancing and a limit on the number of people allowed into the closed space, will be a “game-time decision,” Kolvet said.Phoenix Mayor Kate Gallego, a Democrat, voiced opposition to the event and said it wasn’t sanctioned by the city. She also noted that it ran afoul of the Centers for Disease Control and Prevention’s guidelines restricting large gatherings.”While I do not believe an event of this magnitude can be held safely, particularly as Arizona sees rising COVID cases, the president has decided to continue with this rally,” she said in a statement.The Phoenix city council voted on Friday to mandate face masks in public, as the rates of new cases, hospitalizations and deaths have increased in the state since it began reopening.Gallego suggested that the city enforce the new rule, and urged Trump to wear a mask himself.”Everyone attending tomorrow’s event, particularly any elected official, should set an example to residents by wearing a mask. This includes the president,” she said, adding that the church hosting the event told the city it plans to hand out masks and take the temperature of attendees.News of Trump’s stop at the indoor Arizona gathering comes just days after his controversial campaign rally in Tulsa, Oklahoma, another coronavirus hotspot, against the wishes of local health officials.Just 6,200 people attended the event in the 19,000-seat stadium, a poor showing for what was billed as a campaign reboot for the president.At least eight Trump advance staffers have tested positive for the coronavirus in connection to the event.Joe Gerald, an assistant professor of public health at the University of Arizona, told ABC News that the Students for Trump gathering “could lead to a super-spreader event” in Phoenix.”I think the events playing out in Oklahoma and what’s playing here in Arizona is very similar,” he said. “You’re bringing a large number of people together in a confined indoor space.”Dream City Church, the Phoenix megachurch that rented out its auditorium for the gathering, said in a statement that it installed a new air purification system to clean the air in the facility.In a Facebook post, two men identified as the pastor and a senior official at Dream City Church suggested that no one should worry about attending their church despite urgent pleas by the nation’s top health officials that people should avoid crowds and keep 6 feet apart from people outside their household.”We’ve installed these units, and it kills 99.9% of COVID within 10 minutes,” said Brendon Zastrow, whose Twitter profile says he’s chief operating officer for the church. “COVID cannot live in that environment.””So when you come into our auditorium, 99% of COVID is gone,” added the pastor, Luke Barnett, in a video that has since been removed.The Arizona company that makes the product, Clean Air Exp, suggested Monday in a phone call with an ABC producer that the church might have overstated what its air purifier can do. The owner, Tim Bender, said he would provide a full statement soon.The company’s website said its product “eliminates 99.9% of coronavirus from the air in less than 10 minutes” but that its lab analysis was done on a coronavirus “surrogate,” meaning it wasn’t tested on COVID-19 specifically. The website did not claim COVID could never survive any environment.In a separate statement on its website, the church also said it agreed to rent its facility to Turning Point Action, the conservative group running the event and the larger Arizona convention, before learning that Trump would be speaking at the event.”Dream City’s facility rental does not constitute endorsement of the opinions of its renters,” the church said in a statement. “Each facility rental is a means to generate funds so that Dream City may continue to carry out its outreach vision: to reach the hurting and needy in the community for Jesus Christ.”Rep. Ruben Gallego, D-Ariz., who represents much of Phoenix in Congress, said he’s concerned that conference attendees who gather for Trump’s remarks in Phoenix could contract COVID-19 and spread it across the country when they leave.”When the president comes in and acts as if there is no public health crisis, it’s harder for us local leaders to actually stem the real crisis,” he said.

As Senate Republicans push for vote on Supreme Court nominee, Collins objects
Ex-workers sue Kroger, claiming they were fired for refusing to wear rainbow symbol
Wisconsin breaks own record for new COVID cases
US sends Bradley Fighting Vehicles to Syria to boost security for troops following Russian encounter
Trump’s leadership is ‘opposite of racism’: Kim Klacik on ‘The View’
Black man beaten by Georgia deputy speaks out after release from jail: ‘I feared for my life’