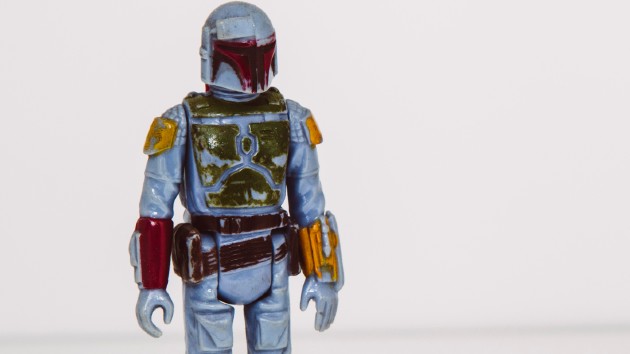 Photo by Whitney Hayward/Portland Portland Press Herald via Getty Images(LOS ANGELES) — The “holy grail” of Star Wars collecting — a prototype of a never-released, rocket-firing action figure of bounty hunter Boba Fett — can be yours right now for a few clicks.  And about a quarter of a million dollars.

An extremely rare action figure depicting a character who spoke just four lines in The Empire Strikes Back is available on eBay for the asking price of $225,000.

Toy company Kenner designed the Fett figure in 1978 with a key feature: a tiny, spring-loaded plastic missile that launched from the bounty hunter’s jet pack.  But worries that kids might choke on the tiny projectile nixed the idea, and only a non-firing version was made available to the public as part of a mail-in rebate.

The prototypes that weren’t destroyed in the late 1970s fell into various hands over the years. Today, it’s believed only a few dozen still exist, in varying conditions.

“This is the kind of piece that transcends collecting,” says Zach Tann, a toy collector who’s brokering the eBay sale for the current owner, a man in Dubai who wants to remain anonymous.

The all-blue, unpainted figure has had a handful of owners over the years. The current seller bought it in 2018 for about $140,000, Tann said. It originally came from the collection of a former Kenner testing technician.

Last July, a different rocket-firing Fett sold for $112,926, breaking a record. Just a few months later, the record fell again when someone bought another one for $185,850.

Steve Sansweet, who’s amassed the world’s largest collection of Star Wars memorabilia at his non-profit museum called Rancho Obi-Wan, put it plainly: “This is the holy grail for collectors.”