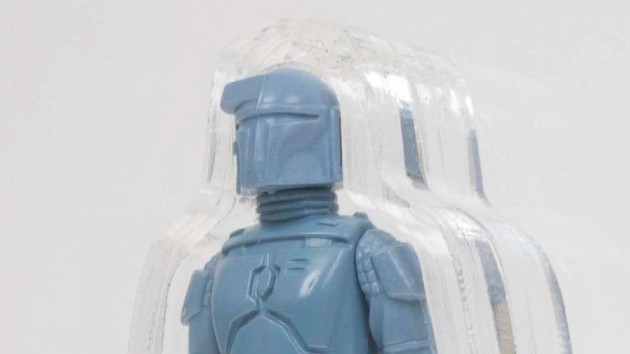 Zach TannBy CLAYTON SANDELL, ABC News(NEW YORK) — The “holy grail” of Star Wars collecting — a prototype of a never-released, rocket-firing Boba Fett action figure — can be yours right now for a few clicks and about a quarter of a million dollars.An extremely rare action figure depicting a character who spoke just four lines in The Empire Strikes Back is available on eBay for the asking price of $225,000. “This is the kind of piece that transcends collecting,” says Zach Tann, a toy collector himself who is brokering the eBay sale for the current owner, a man in Dubai who wants to remain anonymous. “Every time it sells it breaks another record, because they just don’t come very often.”Rocket-firing Boba Fett has attained a mythic, unicorn-like status in the galaxy of Star Wars collectibles. In 1979, the “fearsome, intergalactic bounty hunter” figure was offered as part of a mail-in rebate program.Toy company Kenner designed the Fett figure in 1978 with a key feature: a tiny, spring-loaded plastic missile that launched from the bounty hunter’s backpack. But worries that kids might choke on the tiny projectile sent rocket-firing Fett to the proverbial Sarlacc Pit, and only a non-firing version was made available to the public.The prototypes that weren’t destroyed in the late 1970s fell into various hands over the years, including former Kenner employees. Today it’s believed only a few dozen still exist, in varying conditions.Tann says the version he is helping to sell is graded “Near Mint+/Mint” by the Action Figure Authority, a company that rates the condition of collectibles. It originally came from the collection of a former Kenner testing technician, according to a letter of authenticity.The all-blue, unpainted figure has had a handful of owners over the years. The current seller bought it in 2018 for about $140,000, Tann said.Last July, a different rocket-firing Fett sold for $112,926, breaking a record. Just a few months later, the record fell again when someone bought another one for $185,850.“Action figures are the center of a lot of Star Wars collections,” says Steve Sansweet, who amassed the world’s largest collection of Star Wars memorabilia at a non-profit museum called Rancho Obi-Wan. “This is the holy grail for collectors.”Sansweet says it may be tough to get the full asking price during the current recession.“When you get up to these kinds of prices, there are relatively few people in the world who can afford it,” he said.Rancho Obi-Wan is one of the few places the public can see a rocket-firing Fett figure on display. The museum has two versions, but because of coronavirus, the tour has gone virtual.Tann doesn’t want to specify the amounts of the offers he’s getting for Fett, but says the 3.75 inch-tall plastic figure is no different than a rare book, wine or piece of art.“It’s crazy,” Tann says. “Nostalgia is a huge factor.”Star Wars, Lucasfilm and ABC News are owned by parent company Disney.Copyright © 2020, ABC Audio. All rights reserved.