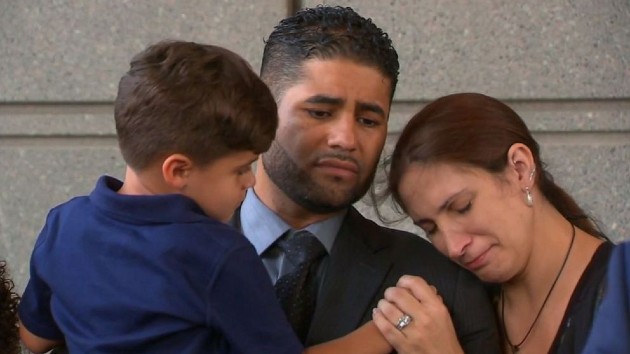 ABC NewsBy EMILY SHAPIRO, ABC News(NEW YORK) — A father has pleaded guilty to two counts of second-degree reckless endangerment in the hot car deaths of his one-year-old twins, New York prosecutors said Tuesday.Juan Rodriguez, 39, was sentenced to a one-year conditional discharge, Bronx District Attorney Darcel Clark said. The twins, Luna Rodriguez and Phoenix Rodriguez, died on July 26, 2019, when Rodriguez left them for about eight hours in the backseat of his car while he went to work in the Bronx, according to Clark.”The children were strapped in their car seats throughout the hot summer day, with no windows open,” Clark said in a statement Tuesday. “These babies suffered horribly.”When Rodriguez left work, he drove for two blocks and then realized his children were unresponsive in the backseat, prosecutors said.The babies, who were declared dead at the scene, died of hyperthermia, prosecutors said. The temperature inside the car was over 100 degrees and their bodies reached 108 degrees.Rodriguez’s wife said in a statement at the time, “this was a horrific accident … he is a good person and great father and I know he would’ve never done anything to hurt our children intentionally.””This was a tragic, unfortunate incident,” Clark said in his statement Tuesday. “I hope that as the sweltering weather is upon us, caregivers will be extra vigilant about children in vehicles.” Luna and Phoenix were two of 53 children to die in hot cars in 2019, according to national nonprofit KidsAndCars.org.That followed a record high of 54 hot car deaths in 2018.Five children have died in hot cars so far this year.A list of hot-car safety tips can be found here. Copyright © 2020, ABC Audio. All rights reserved.

South Dakota seeing surge in COVID-19 transmission as cases rise in Midwest
Steelers-Titans game pushed back to later in season due to more COVID-19 cases
Donald Glover reveals he secretly welcomed a son while in quarantine
Behind in Wisconsin, Trump plans to visit battleground amid COVID-19 surge
Childcare crisis during pandemic will set women back in the workplace, experts say
COVID-19 pandemic reversed decades of employment gains for disabled