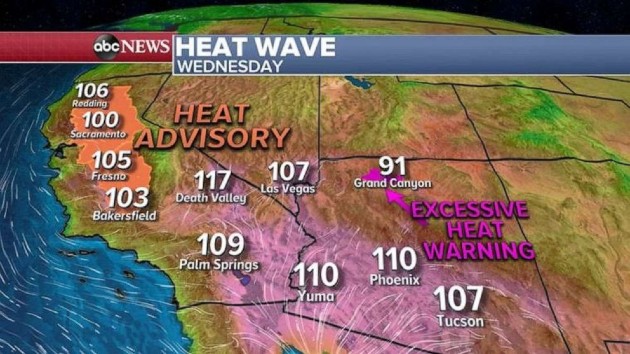 ABC NewsBy MAX GOLEMBO, ABC News(NEW YORK) — About 200 homes were evacuated in the Phoenix metro area due to a new wildfire that ignited Tuesday. The new wildfire is called the Aquila Fire and it is 893 acres and is 0% contained and, currently, gusty winds are fueling this fire. Overall, lighter winds are helping to contain the Bush Fire north of Phoenix that is now 186,967 acres and is 73% contained. In Tucson, Arizona, the Bighorn Fire has grown to 65,536 acres and is now 33% contained. But some lighter winds in the past few days has helped with the containment of this fire. Very hot weather will continue from Arizona to northern California with temperatures in the 100s and 110s with localized gusty winds expected, much like the ones that helped the Aquila Fire grow.The heat is not going anywhere and by the end of the week and into the weekend, windy and dry weather is on the way as a new storm system moves in. A cold front will stall across the South over the next 24 hours, producing more strong to severe storms in the area. These storms in the South will be moving very slowly and can produce localized and very heavy rain. The heaviest rain will be from southern Louisiana to Alabama where up to 5 inches of rain could accumulate.Meanwhile, a new storm system will move out of the Rockies and will bring severe thunderstorms to the Midwest and the Great Lakes on Thursday and Friday. On Thursday, severe storms will be possible in the Dakotas and Minnesota with damaging winds and a few tornadoes possible. On Friday, this storm system will move east into Chicago and Detroit where damaging winds will be the biggest threat.Copyright © 2020, ABC Audio. All rights reserved.