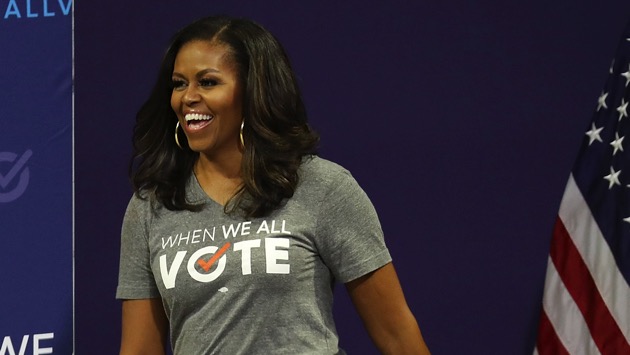 Joe Raedle/Getty ImagesBy DANIELLE LONG, ABC News(NEW YORK) — Michelle Obama wants everyone to get out and vote. And for those who don’t think it’s important, she’s got a super-relatable and logical explanation as to why it is.During an interview for Harper’s Bazaar with television producer and writer extraordinaire Shonda Rhimes, the former first lady broke down why it’s so important for people, especially young adults, to exercise their right to vote.”Talking about issues, our duties as citizens, the impact our votes have — that’s all important. But for me, when I’m talking to young people, I like to ask them a simple question: Would you let your grandma decide what you wear on a night out to the club?””Would you want her picking out the car you drive or the apartment you live in?” Obama continued. “Not many people want someone else making their decisions for them, especially when that person might not see the world the same way as they do. That’s what happens when you don’t vote: You are giving away your power to someone else — someone who doesn’t see the world the same as you.”The mother of two added that not voting is a way of letting someone else “make some really key decisions about the way you live.””And the truth is, that’s exactly what some folks are hoping you’ll do,” Mrs. Obama explained. “They’re hoping that you’ll stay home so that they can make these important decisions for you.””When we all vote, in all elections, we get the kind of responsive leadership that speaks for our families and our communities,” she added.Copyright © 2020, ABC Audio. All rights reserved.