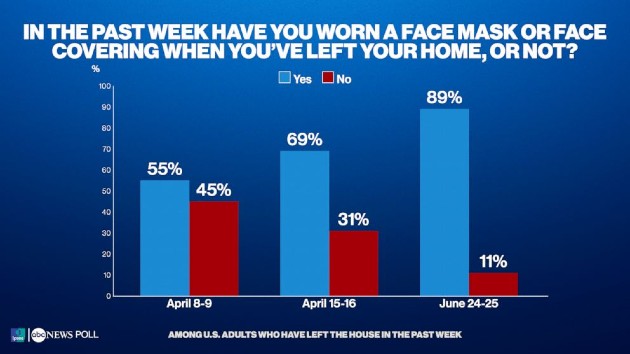 ABC News/Ipsos PollBy KENDALL KARSON, ABC News(NEW YORK) — An overwhelming majority of Americans say they’ve worn a face mask in public in the last week, as the coronavirus pandemic persists and infections reach new highs in more than a dozen states, a new ABC News/Ipsos poll finds.Nearly nine in 10 Americans (89%) who left their home in the last week said they wore a face mask or a face covering, compared to only 11% who said they did not. The latest poll, conducted by Ipsos in partnership with ABC News, using Ipsos’ Knowledge Panel, marks a 20-point increase since the last time the question was asked in mid-April, when only 69% of Americans said they took the prophylactic measure in public, which was up from 55% in a survey released on April 10.Despite the huge number of people using masks, the country’s approach to mask-wearing is largely voluntary. Only 18 states, including Michigan, New York, California, Nevada, Maine, Delaware and Maryland require masks to be worn in businesses statewide, while most states have some mask requirements, according to data compiled by Masks4All, a group that advocates for expanded mask requirements.It’s not clear, though, if respondents wore masks every time they left home, or only when they came into close contact with others.Earlier this week, Dr. Anthony Fauci, the nation’s top infectious disease expert, told lawmakers on Capitol Hill that the rising numbers of cases in certain states were “disturbing” and urged more needed to be done to expand testing and encourage people to wear masks and socially distance.The new poll comes as many governors across the country are backtracking on relaxed restrictions, amid sharply rising cases of COVID-19 in many states. The current number of coronavirus cases in the country tops 2.4 million, as the death toll stands at more than 122,000.Even some states with the most aggressive approaches to reopening their economies are hitting pause for now due to surging cases. In Texas, GOP Gov. Greg Abbott, whose state was among the first to reopen, announced on Thursday that he is temporarily putting plans for additional reopening on hold as the state contends with increases in cases, rate of positivity, hospitalizations, and deaths — even hitting a record number of new cases and hospitalizations on Wednesday.Although mask wearing has become politicized, and Democrats are more likely to wear face coverings in public, it is still the case that an overwhelming majority of Republicans are wearing them as well.Among those who have left their home in the last week, 99% of Democrats chose to wear a covering in public, compared to 79% of Republicans. Independents fall in the middle, with 87% saying the same.Racial divisions show, too, in the new poll, with non-white Americans more likely than white Americans to wear masks, 93%-86%. It is also an issue with a gender split, with more women (93%) than men (84%), who have been in public in the last week, saying they wore a mask.This ABC News/Ipsos poll was conducted by Ipsos Public Affairs‘ KnowledgePanel® June 24-25, 2020, in English and Spanish, among a random national sample of 579 adults. Results have a margin of sampling error of 4.7 points, including the design effect. See the poll’s topline results and details on the methodology here. Copyright © 2020, ABC Audio. All rights reserved.