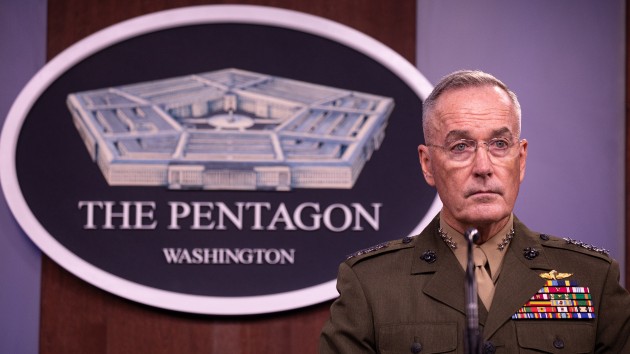 Yasin Ozturk/Anadolu Agency via Getty ImagesBy CHEYENNE HASLETT, ABC News(WASHINGTON) — Former chairman of the Joint Chiefs of Staff Joseph Dunford is the leading candidate to be named chair of the Congressional Oversight Commission, two sources familiar with the commission confirmed.The decision, which is not yet final, comes more than three months after the commission, tasked with overseeing $500 billion of taxpayer dollars, was created.Dunford’s name has been mentioned for weeks, according to the sources, and the general has undergone the vetting processes to look for conflict of interests. The chair will eventually be announced jointly by House Speaker Nancy Pelosi and Senate Majority Leader Mitch McConnell. Politico and the Wall Street Journal first reported Dunford’s expected-appointment for the position.So far, four members have been appointed to the Congressional Oversight Commission, which was created to monitor $500 billion of loans the Federal Reserve will dole out to different corners of the economy to bridge the damage from coronavirus. The commission has produced two public reports so far on the program; one per month since the commission was created, and held its first sit-down meeting on Wednesday with Treasury Secretary Steven Mnuchin and Federal Reserve Chair Jerome Powell.Current members on the commission include two Republican lawmakers, Sen. Pat Toomey of Pennsylvania and Rep. French Hill of Arkansas, and two Democrats, Rep. Donna Shalala of Florida and Bharat Ramamurti, a senior advisor to former 2020 candidate and Sen. Elizabeth Warren of Massachusetts. The fifth member of chair of the commission requires joint agreement from both Pelosi and McConnell.

Because of the fragile negotiations, members on the commission briefed on the discussions between McConnell and Pelosi have kept a tight lid on names of the contenders, fearful a premature announcement could scuttle the vetting process and cause candidates to withdraw from consideration for the role, which the CARES Act stipulates will last through 2025.Nonetheless, commission members from both sides of the aisle have urged their party leaders to move quickly.”I’m in favor of having a chair as soon as it is possible,” Toomey told ABC News in a June phone interview.”It just makes more sense to have the chair before we’re doing hearings, for instance, or before we hire an executive director and really begin staffing up,” he said.Hill, too, noted the benefit of hiring staff, which the commission can’t do without a chair. The oversight body would be “more effective and more efficient if we had a modest commission staff to assist in the process,” he said.Ramamurti, the only non-congressional member on the commission, said on Twitter last week that the 83-day delay in naming a chair — and therefore preventing the commission from hiring staff — was creating “serious obstacles to performing robust oversight.”The chair will be the glue of the commission and allow it to become a fully functioning oversight body, according to conversations with commission members. Without a chair, the commission hasn’t hired staff and has yet to hold any hearings or call any government officials in for testimony, though they collectively had more than 50 questions for the Treasury Department in its first report.Warren, who was chair of the panel that oversaw the stimulus package during the 2008 recession — which the current commission was modeled after — was seen as an integral part of its relative effectiveness, according to Damon Silvers, who served on the panel with Warren in 2008. A chairperson is necessary to “demand and receive cooperation from the Treasury” and the Federal Reserve, Silvers said.“Obviously, as has been noted, the absence of the chair for the current oversight commission is a crippling deficiency. Having excellent and numerous staff is essential. And the willingness to create expectations around regular reports and hearings and to make demands for data and witnesses is essential,” Silvers said in a hearing before the Congressional Progressive Caucus in late June.The panel Silvers and Warren served on had 46 staff at its peak, according to Ramamurti, who gave the number as context for how the 2008 panel was able to do full-scale investigations.“We’re unable to do that without a chair,” Ramamurti said at the same hearing in late June.“There are things that we can do without a chair and that we’re doing — we put out our report, as to every 30 days, we can hold hearings, and my hope is that we will have one in the near future — but without staff, it’s going to be very tough. And we need a chair to get staff,” he said. Copyright © 2020, ABC Audio. All rights reserved.