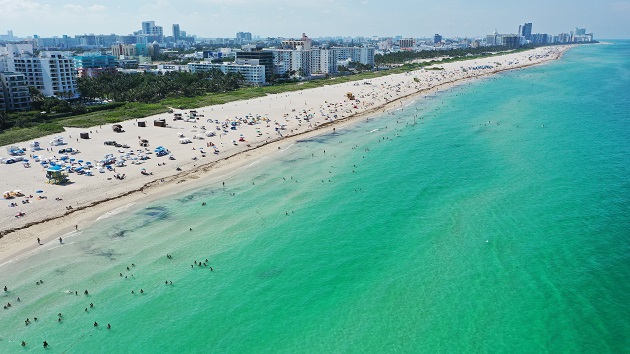 (NEW YORK) — A pandemic of the novel coronavirus has now killed more than 494,000 people worldwide.Over 9.8 million people across the globe have been diagnosed with COVID-19, the disease caused by the new respiratory virus, according to data compiled by the Center for Systems Science and Engineering at Johns Hopkins University. The actual numbers are believed to be much higher due to testing shortages, many unreported cases and suspicions that some governments are hiding the scope of their nations’ outbreaks.The United States has become the worst-affected country, with more than 2.4 million diagnosed cases and at least 125,039 deaths.Latest:

Here’s how the news is developing today. All times Eastern. Please refresh this page for updates

3:14 p.m.: Pence’s campaign events postponed in Florida, ArizonaVice President Mike Pence’s campaign events in Arizona and Florida this coming week have been postponed “out of an abundance of caution,” a Trump campaign official confirmed to ABC News.Both states are seeing an increase in rates of positivity, hospitalizations, and deaths, according to an ABC News analysis.The vice president was scheduled to continue his “Faith in America” tour in Tucson, Arizona, on Tuesday and Sarasota, Florida, on Thursday.2:56 p.m.: 85 people test positive after contracting virus at restaurantAt least 85 people have tested positive for COVID-19 after contracting the virus at a restaurant in Michigan, officials said.The Ingham County Health Department told ABC News that they have “85 cases associated with Harper’s Restaurant & Brew Pub in East Lansing. Of those 85, five are secondary, which means they were in close contact with someone who went to Harper’s, but did not go themselves.”Those who have tested positive have been asked to self-quarantine. However, officials warned anyone who was at the establishment between June 12 to June 20 to also self-quarantine.On Monday, the restaurant announced it would close the restaurant to install air purifying technology in the HVAC system.2:20 p.m.: South Carolina reports highest number of new COVID casesSouth Carolina recorded its single highest number of new COVID-19 cases, with 1,599 new confirmed cases, according to the state’s department of health.The previous high was 1,293.There were also 15 new confirmed deaths and two probable deaths related to COVID-19.The total number of confirmed cases now stands at 31,850, while confirmed deaths reached 707. There are 89 probable cases and four probable deaths.

New York’s Department of Health will investigate a potential COVID-19 spread at a high school graduation ceremony in Westchester County, according to Gov. Andrew Cuomo’s office.Five people who attended the ceremony have tested positive for the virus, the governor’s office said. The first person to test positive was someone who had recently traveled to Florida.The four others then had contact with that person and subsequently tested positive. A person who had recently traveled to Florida attended the ceremony and then began showing symptoms, the governor’s office said. That person then tested positive for the virus.”We’re prepared to do the aggressive testing and contact tracing required to slow and ultimately control any potential clusters of new cases like the one in Westchester County,” Cuomo said in a statement.He also said he was issuing an executive order that says any New York employee who voluntarily travels to a high-risk state will not be eligible for the COVID protections created under paid sick leave.The graduation was for Horace Greeley High School and was a drive-in ceremony on June 20.All the individuals who have tested positive are self-isolating, the governor’s office said.However, one of the people who tested positive also attended a “Field Night” event on June 20, which was also attended by juniors and seniors and students from surrounding school districts.Cuomo’s office recommended anyone who attended that event or any events associated with graduation go into quarantine and remain there until July 5.

10:59 a.m.: More than 9,600 new cases in FloridaThe Florida Department of Health reported a total of 132,545 cases of COVID-19, marking an additional 9,636 new positive cases.The rise marks a one-day record for Florida.There were 76,129 tests conducted Friday, with a 12.7% positivity rate, according to the health department.The rise in cases comes as Miami-Dade County announced that it’s closing all beaches for the July 4 holiday weekend.7:02 a.m.: Reopen Maryland co-founder tests positiveThe co-founder of ReOpen Maryland, who organized rallies to pressure Gov. Larry Hogan to lift the state’s stay-at-home order, said he has tested positive for COVID-19.Tim Walters, a former Republican candidate for the General Assembly, said that he had a dry cough for months but it recently worsened. He said he then began to experience an excruciating headache, a fever and the inability to focus with one of his eyes, which led to vertigo.Walters, 53, a diabetic who has had mini-strokes, said he went to an emergency room Monday and was diagnosed with the virus.“Here I am months after not wearing a mask at rallies, churches and so on, and so it’s funny how capricious this thing is,” he said in a Facebook video.Walters said he doesn’t plan to provide health officials with the people he’s had close contact with for the contact tracing program.5:40 a.m.: HHS ‘actively working’ on the idea of group testingThe U.S. Department of Health and Human Services confirmed to ABC News Friday night that the agency is pushing the idea of “pooling” tests, which is when officials pull together samples from large groups and test them at once to see if individual testing is needed.The White House coronavirus task force is actively talking about trying to push it at the local level as a surveillance tool. The primary reason is because so many people are carrying the virus without symptoms.“HHS is actively working with a number of collaborators to validate pooling so that it can be used generally as a technique,” HHS said in a statement to ABC News.“Pooling is a public health surveillance strategy in which samples from more than one person are ‘pooled’ in the same test,” Adm. Brett Giroir, an assistant secretary of HHS put in charge of coordinating testing, said. “Depending on the underlying prevalence of the disease, this can be extremely beneficial. For example, if five samples are pooled into a single test, and the test is negative, then all five individuals are negative.”Dr. Anthony Fauci, the nation’s top infectious disease expert, said Friday test pooling might be needed because the current testing strategy of contact tracing hasn’t been working.One issue with contact tracing for COVID-19, Fauci said, is that there are too many asymptomatic people, which means you can’t identify them if they don’t have symptoms. Fauci also said since many people don’t trust the government, people are not answering contact tracing calls.4:53 a.m.: Miami set to close beachesAs the number of coronavirus cases in the state of Florida continues to increase, Miami-Dade County announced that it’s closing all beaches for the July 4 holiday weekend.Mayor Carlos Gimenez announced he will be signing an executive order Saturday to close all beaches starting July 3 through at least July 7, though he said that could be extended “if conditions do not improve and people do not follow New Normal rules requiring masks to be worn always inside commercial establishments and outdoors when social distancing of at least 6 feet is not possible.”Particularly worrisome in the recent spikes, the mayor said, is the area is seeing a higher hospitalization rate with its younger population.”As we continue to see more COVID-19 positive test results among young adults and rising hospitalizations, I have decided that the only prudent thing to do to tamp down this recent uptick is to crack down on recreational activities that put our overall community at higher risk,” Gimenez said in a statement Friday.In his order, the mayor is also banning any gatherings of more than 50 people and is closing all parks and beaches to limit fireworks viewing. He said fireworks displays must be viewed from one’s home or parked vehicle.”After all the success we have had tamping down the COVID-19 curve, we cannot turn back and overload our hospitals, putting our doctors and nurses at greater risk with more emergency room cases,” Gimenez said Friday. “Everyone must do their part and follow the rules.”Florida is one of several states across the U.S. to recently see a significant increase in diagnosed cases of COVID-19. Its coronavirus positivity rate jumped to 13% Friday, according to new numbers from the Florida Department of Health.Florida has more than 122,000 diagnosed cases of COVID-19, with at least 3,366 deaths.Copyright © 2020, ABC Audio. All rights reserved.