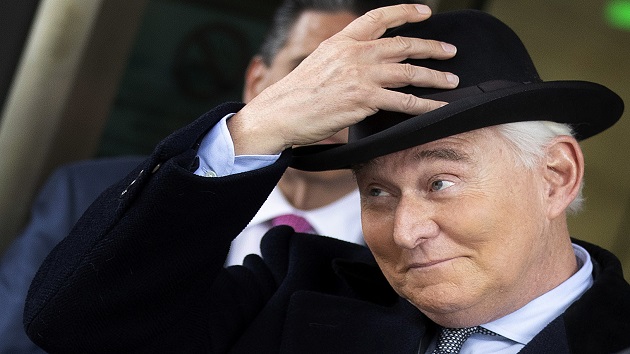 (WASHINGTON) — President Donald Trump further fueled speculation Saturday morning that he plans to pardon longtime friend and adviser Roger Stone.After a judge on Friday gave Stone a surrender date of July 14 — he had sought to report to the Georgia prison on Sept. 3 — Trump tweeted a story about a petition for the president to pardon Stone as he faces a sentence of 40 months for lying to Congress and misleading investigators on several key elements of their probe into Russian meddling in the 2016 election.On Saturday, Trump retweeted a message saying “IT’S TIME TO #PardonRogerStone”This is not the first time a Trump tweet has raised the prospect of a Stone pardon. Earlier this month, on June 4, the president tweeted that “Roger was a victim of a corrupt and illegal Witch Hunt, one which will go down as the greatest political crime in history. He can sleep well at night!”Copyright © 2020, ABC Audio. All rights reserved.

Trump: ‘Very close’ to Supreme Court decision, will announce nominee Saturday
University of California ‘unfairly admitted’ applicants based on connections: Report
As nation surpasses 200,000 deaths, Trump keeps downplaying coronavirus
‘On the Basis of Sex’ and ‘RBG’ returning to theaters in tribute to Ruth Bader Ginsberg
Trump bashes China at UN amid warnings against a world divided by two superpowers
Chelsea Clinton: ‘Unconscionable’ that Trump ‘lied’ to public about COVID-19