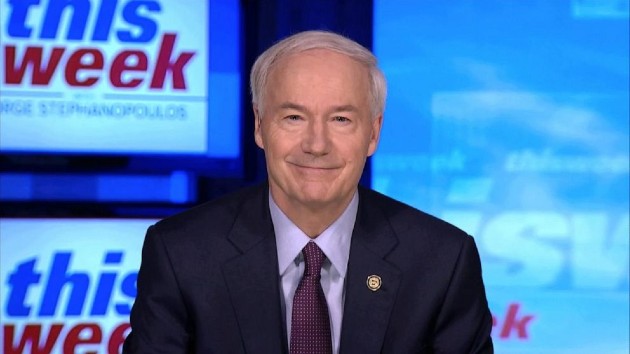 ABC NewsBy ADAM KELSEY, ABC News(WASHINGTON) — As COVID-19 cases continue to surge across the Southern United States, the governor of one of the states which has paused its reopening efforts said Sunday that testing for the virus needs to increase exponentially, and lobbied for President Donald Trump to invoke the Defense Production Act in order to manufacture the supplies necessary to meet the demand for such efforts.”We’ve doubled the amount of our testing nationally. We’ve got to double it again. That is probably the most important thing that we can do,” Arkansas Gov. Asa Hutchinson said on ABC’s This Week Sunday. “I really think we need to look at a greater use of the Defense Production Act so that we can make sure that supply keeps up with the demand that we know is going to continue growing.” Trump invoked the 1950 law earlier this year to mobilize the manufacturing of ventilators and later require that meatpacking plants remain open, but initially faced criticism from Democrats for not utilizing the act more extensively to secure personal protective equipment and testing supplies. In April, the Defense Department announced it would use over $75 million in funding through the Defense Production Act to compel the manufacturing of millions of testing swabs.”And so you think the national effort has to be stepped up?” ABC News Chief Anchor George Stephanopoulos asked Hutchinson.”The president’s done a very, very good job of utilizing the Defense Production Act when it comes to energy production and ventilators, making sure that we have that capacity,” Hutchinson said. “We need to continue to use that in the areas of the supplies for testing. Demand is only going to increase.”In Arkansas, the number of coronavirus cases rose steadily throughout the month of June, leading Hutchinson to halt the state’s reopening plans this week — becoming one of at least 10 states that have stopped or reversed their plans amid increasing numbers. On Saturday, the United States as a whole surpassed 2.5 million total positive cases of COVID-19 and 125,000 deaths from the virus, according to a count by Johns Hopkins University.”We’re clearly on pause here in the state in terms of moving to lift further restrictions until we’re comfortable with where we are in controlling the spread,” Hutchinson said Thursday, as the state topped 10,000 coronavirus cases for the month of June.Earlier in the week however, the governor claimed in a PBS interview that reopenings were not to blame for the increase.”We have not seen a correlation between lifting restrictions and the new cases that we have,” Hutchinson said, three days before announcing the “pause.” “The new cases actually are coming out of some of the essential industries that are open regardless.”Stephanopoulos later pressed Hutchinson on the debate over mask-wearing, questioning why a mandate that individuals wear face coverings hasn’t been implemented statewide.”We’re not going to pass a mandate that is unenforceable,” Hutchinson said, while noting that he tries to set a good example by wearing a mask and describing it as “a very important part of the equation.”To that point, Stephanopoulos asked whether “the president and the vice president (should) be doing more to set an example on the wearing of masks.””I saw the vice president as he went into the briefing the other day, he had a mask as others did. I think that’s a good example,” the governor said. “It is important that there is a consistent national message to take this seriously, that we are going to wear masks, that we’re going to set that example — that consistent national message supplements what we’re trying to do in this state.”Later in the interview, Stephanopoulos questioned Hutchinson about the ongoing debate over the removal of Confederate symbols and statues across the country, including neighboring Mississippi’s effort to change its state flag, a portion of which includes the Confederate battle flag.The governor emphasized the importance of going through “the right process” to remove the monuments and references, as opposed to destruction “by acts of violence and vandalism,” and noted some Arkansas statues have already been relocated.”But your personal opinion is that they should come down?” Stephanopoulos asked.”I think it’s time to look for other places that we can know that history and remind ourselves of the lessons of history,” Hutchinson said.