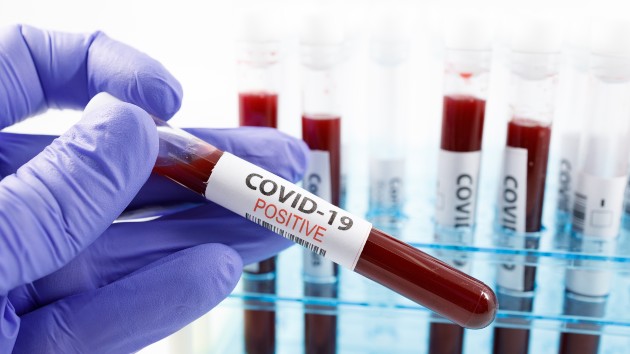 Ovidiu Dugulan/iStockBy MORGAN WINSOR, ABC News(NEW YORK) — A pandemic of the novel coronavirus has now killed more than 502,000 people worldwide.Over 10.1 million people across the globe have been diagnosed with COVID-19, the disease caused by the new respiratory virus, according to data compiled by the Center for Systems Science and Engineering at Johns Hopkins University. The actual numbers are believed to be much higher due to testing shortages, many unreported cases and suspicions that some governments are hiding the scope of their nations’ outbreaks.Since the first cases were detected in China in December, the United States has become the worst-affected country, with more than 2.5 million diagnosed cases and at least 125,808 deaths.

Here’s how the news is developing Monday. All times Eastern:

9:05 a.m.: Putin says he ‘regularly’ gets tested for COVID-19Russian President Vladimir Putin said he gets tested for the novel coronavirus every “three to four days,” according to a new interview with state-run television channel Rossiya-1. So far, Putin said all his tests results have been negative, “thank god.” The Russian leader admitted that having to work from home was a challenge for him because he enjoys having direct communication with other people.On Monday, Russia’s coronavirus headquarters reported 6,719 new cases of COVID-19, bringing the nationwide total to 641,156. Russia has the third-highest number of diagnosed cases in the world, after the United States and Brazil, according to a count kept by Johns Hopkins University. Russia’s death toll from the disease now stands at 9,166, after an additional 93 patients died over the past 24 hours, according to the country’s coronavirus headquarters.

8:20 a.m.: Americans must ‘act responsibly,’ health secretary saysAmid a spike in coronavirus infections across the United States, Health and Human Services Secretary Alex Azar is calling on Americans to practice social distancing and wear face masks as people return to work and school. “We have all got to as Americans act responsibly, even as we reopen and get back to work, get back to school and get back to health care, we’ve got to practice social distancing. We’ve got to use face coverings when we can’t practice social distancing,” Azar told ABC News chief anchor George Stephanopoulos in an interview Monday on Good Morning America.Many areas in the southern part of the country are now experiencing “very serious outbreaks,” where the average age of people testing positive for COVID-19 is reportedly 35 or younger and many are asymptomatic, according to Azar. “We have a lot more tools now than we had two months ago,” he said, “but still there is a heavy burden on us in terms of our collective responsibility as individuals when we reopen.”

7:12 a.m.: Trump secures half a million treatment courses of remdesivirU.S. President Donald Trump has secured half a million treatment courses of remdesivir for American hospitals through September, Health and Human Services Secretary Alex Azar announced Monday. It’s the first antiviral medication to show effectiveness against the novel coronavirus in human clinical trials. “This is the drug that, if you’re hospitalized, can reduce the length of your stay by a third,” Azar told ABC News chief anchor George Stephanopoulos in an interview Monday on Good Morning America.The deal between the Trump administration and California-based drugmaker Gilead Sciences allows U.S. hospitals to purchase remdesivir in amounts allocated by the Department of Human and Health Services as well as state health departments. The federal government is working with states to make sure the drug “gets to the hospitals most in need,” Azar added.Gilead originally developed remdesivir to treat patients with Ebola virus disease. In May, the Food and Drug Administration authorized the drug for emergency use to treat patients hospitalized with severe cases of COVID-19. Since then, the U.S. government has been distributing treatment courses of remdesivir that were donated by Gilead. There is currently no FDA-approved products to treat or prevent COVID-19. Gilead announced Monday that it will charge $2,340 for a typical treatment course of remdesivir for patients covered by government health programs in the United States and other developed nations where the drug is authorized for use. The price would be $3,120 for patients with private health insurance in the United States.

6:18 a.m.: Over 200 urged to quarantine after positive case at a Planet FitnessMore than 200 people in West Virginia are being asked to quarantine themselves and watch for symptoms after a gymgoer tested positive for COVID-19.The positive case is a client of Planet Fitness on Fort Pierpont Drive in Morgantown, and the Monongalia County Health Department is now urging members who were there between 9 a.m. and 3 p.m. local time on June 24 to stay home for 14 days since being exposed. An estimated 205 people were at the gym during that window of time.”They also should do their best to stay away from others in their household,” Dr. Lee B. Smith, Monongalia County health officer and executive director of the county’s health department, said in a statement Saturday. “Ways to do this would be to stay primarily in one area of the home and to wear a mask if you must be around others.”Individuals should not leave their homes until July 8 or unless to seek medical care. Those who develop symptoms should contact their primary care provider and get tested.West Virginia has seen an uptick in coronavirus infections in recent weeks. In the past 10 days, the Mountain State has reported an increase of about 400 COVID-19 cases. In the 10 days prior to that, the case count climbed by about 240, according to health officials.As of late Saturday afternoon, West Virginia had reported a total of 2,782 confirmed COVID-19 cases. Monongalia County currently has 152 cases, up 21 cases in the past 10 days, health officials said.Residents are encouraged to wear masks in public, wash hands thoroughly and often, and maintain a distance of six feet from others.”These measures have proven to slow the spread of COVID-19,” Dr. Smith said. “If we want to continue to open up businesses and avoid the need to reverse some of the steps we have taken, people must take these precautions seriously.”

5:52 a.m.: New York records lowest rise in deaths since MarchNew York Gov. Andrew Cuomo announced on Sunday the state’s lowest death toll and hospitalizations from COVID-19 since the pandemic began.Just five new deaths were reported in New York state on Saturday — the lowest single-day increase since March 15. The statewide death toll now stands at 24,830, according to Cuomo.Hospitalizations also continued to drop — now below 900 — and less than 1% of COVID-19 tests were positive on Saturday, Cuomo said.There were 616 new cases confirmed, bringing the statewide total to 392,539, according to Cuomo.New York, once the epicenter of the coronavirus epidemic in the United States, and other northeastern states have made major progress in recovering from their outbreaks. Meanwhile, several southern and western states are experiencing an alarming surge in new infections.An ABC News analysis found that seven states — Arizona, Florida, Georgia, Idaho, South Carolina, Tennessee and Utah — have seen a record number of new cases since Friday.

4:39 a.m.: China sees decline in new casesChina on Monday reported just 12 new confirmed cases of COVID-19 and no new deaths, as the country which was the original epicenter of the coronavirus pandemic continues to see a downward trend in infections.Five of the new cases were imported from overseas while seven were cases of domestic transmission in Beijing, where more than eight million of the city’s 21 million residents have been tested for the novel coronavirus in recent weeks. The Chinese capital has seen a recent spike in infections, though the number of new cases reported there on Monday was down by half from the previous day, according to China’s National Health Commission.Overall, the Chinese mainland has reported 83,512 confirmed cases of COVID-19 with at least 4,634 deaths. There are still 418 patients receiving treatment for the disease, while another 112 are under observation for testing positive without showing any symptoms or for being suspected cases, according to the National Health Commission.

3:42 a.m.: US reports more than 38,800 new casesMore than 38,800 new cases of COVID-19 were identified in the United States on Sunday, according to a count kept by Johns Hopkins University.The latest daily caseload is down from the country’s record high of more than 45,000 new cases identified last Friday.The national total currently stands at 2,549,028 diagnosed cases with at least 125,803 deaths.The new cases include people from all 50 U.S. states, Washington, D.C., and other U.S. territories as well as repatriated citizens.By May 20, all states had begun lifting stay-at-home orders and other restrictions put in place to curb the spread of the novel coronavirus. The day-to-day increase in cases then hovered around 20,000 for a couple of weeks before shooting back up to over 30,000 and then crossing 40,000 last week.Nearly half of all 50 states have seen a rise in infections in recent weeks, with some — such as Florida, South Carolina and Georgia — reporting daily records. Copyright © 2020, ABC Audio. All rights reserved.