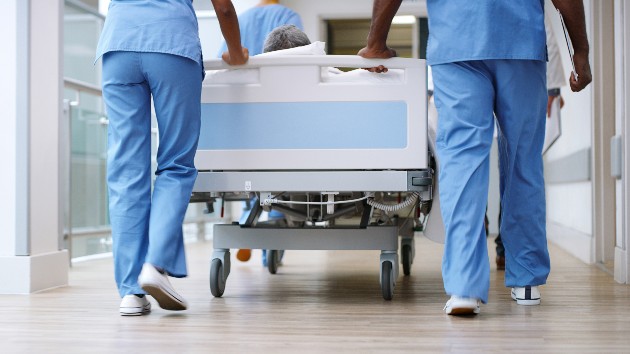 shapecharge/iStockBy LUCIEN BRUGGEMAN, ABC News(NEW YORK) — Across the country, daily coronavirus cases are again eclipsing previous records, prolonging a crisis that’s engulfed the national psyche.But over the past several months, as researchers’ understanding of the virus has evolved, so, too, has the standard of care. Medical professionals have said American health care infrastructure is on firmer ground today than in March, when COVID-19 began overwhelming hospitals in major American cities.”As we go along, we learn more and more through clinical experience, we share information, and we try to improve the care of people sick with COVID,” said Dr. Anish Mahajan, chief medical officer at Harbor-UCLA Medical Center. “If you are seriously ill and need to be in the hospital for COVID, the care has changed.”From re-evaluating patient treatment options to a logistical overhaul meant to protect front-line workers, health care providers have said they’re better positioned to address the steady drumbeat of new cases emerging from California to Florida.Dr. Leigh Vinocur, the national spokesperson for the American College of Emergency Physicians, said doctors and nurses “have had to be very agile and adjust our practices on the fly.”In hospitals, a significant shift in patient care has taken hold, redefining the bedside manner for which nurses are known. Staffs have sought to develop creative measures in an effort to diminish face-to-face interactions. Those efforts include dispatching iPads and baby monitors to communicate with sick patients from outside their rooms.At Ohio State University’s Wexner Medical Center, for example, patients on intravenous pumps are unlikely to be in the same room with the machine, allowing nurses to avoid unnecessary exposure to the virus.Cheryl Hoying, chief nursing executive at the Ohio State College of Nursing, praised her staff’s ingenuity in experimenting with new treatment options. Over the past few months, she’s encouraged nurses to pitch ideas, and the best ones have landed on an “innovation list” for hospital leaders to consider.”I don’t care if it’s half-baked, totally baked, or wherever it is in the middle,” Hoying told her staff, “let’s capture those great ideas people had during the interim.”One item on Hoying’s “innovation list” is called “proning patients,” the practice of turning patients with respiratory ailments — a common side-effect of novel coronavirus — onto their stomachs, as opposed to keeping on their backs.It’s a technique health care providers across the country have adopted as part of broader efforts to adapt to our ever-changing understanding of the disease’s unpredictable symptom profile.”Putting people in prone position is associated with sooner improvement in their clinical condition,” said Harbor-UCLA’s Mahajan.Another technique experts highlighted, and which Mahajan said was “learned through experience,” is determining when to place extremely ill patients on a ventilator.Initially, patients with troubling physiological metrics like low blood oxygen levels immediately would be intubated. But over time, doctors came to realize that strategy came with detrimental long-term implications.”We noticed that once we get to the level of putting patients on a ventilator, it’s very difficult to extubate and get them off the ventilator on the backend,” said Dr. Thomas Solomon, an emergency physician at Providence Cedars-Sinai in Los Angeles. “So we’ve tried to withhold putting sick people on ventilators as much as possible because outcomes aren’t great once they’re on it.”Solomon said another significant shift to patient care at his hospital has been screening for blood clots in the emergency room, something doctors hadn’t initially considered. He said blood clot screening is an example of a “stride that has been made” in tandem with understanding the disease’s manifestations, as more and more patients suffered heart, lung and kidney failures.”It’s a dynamic process, and we’re learning right alongside with the [scientific] community,” Solomon added. “It’s tough to stay ahead of this virus, but we’re trying to stay on offense against it.”The most prominent way in which researchers are assisting health care workers is in discovering drugs that diminish the disease’s detriment to the body.Last month, the Food and Drug Administration approved a drug called remdesivir for use on COVID-19 patients. And just last week, researchers in the United Kingdom released a study that suggests a steroid called dexamethasone might help save one-third of patients who end up on ventilators.Beyond the growing array of treatments and therapies doctors described, hospital leaders from coast to coast have adopted what Mahajan calls “small logistical changes” — adjustments to the patient experience that serve to diminish transmission.The ACEP has published guidance on practices culled from hospitals around the country. These include spacing out seats in waiting rooms, creating separate entrances for possible coronavirus patients and opening “negative pressure” rooms to help decontaminate the air.”Emergency departments across the country are continually adapting their procedures as we learn more about the virus and how to treat it,” the ACEP website proclaims.Those adaptations are expected to continue, experts said. The disease’s versatility makes it difficult to know whether today’s treatment regimen will last. In the same way patient care has evolved from March to June, experts said they’re anticipating further adjustments in the coming months.”It’s a very fluid situation, incredibly dynamic. From patient to patient I think we’re continuously being surprised,” Solomon said. “We’re still learning, we’re still adapting … a lot of us are consistently humbled by this disease.”Copyright © 2020, ABC Audio. All rights reserved.