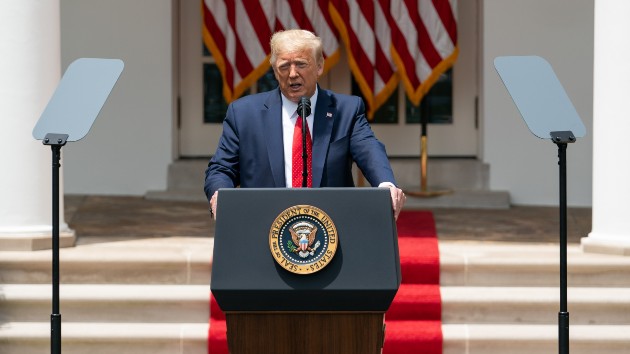 Official White House Photo by Shealah CraigheadBy MEREDITH DELISO, ABC News(WASHINGTON) — President Donald Trump retweeted a video Sunday morning of a Trump supporter shouting “white power” at anti-Trump demonstrators. The retweet of the video was later deleted.Trump shared the video on his @realDonaldTrump account, which has more than 82 million followers, with the message, “Thank you to the great people of The Villages.” The tweet was deleted about three hours later following an uproar over the phrase “white power,” a racist slogan used by white supremacists.In a statement, White House deputy press secretary Judd Deere said Trump did not hear the use of the slogan.”President Trump is a big fan of The Villages. He did not hear the one statement made on the video,” Deere said. “What he did see was tremendous enthusiasm from his many supporters.”About 10 seconds into the two-minute video, an unidentified man driving a golf cart decked out with “Trump 2020” and “America First” signs shouts “white power” and raises his fist. The person who posted the video on Saturday claims it took place in The Villages, a retirement community in central Florida. It appears the video was taken on June 14.Trump is scheduled to head to Florida in August to give his acceptance speech for the Republican nomination in Jacksonville.On CNN’s State of the Union on Sunday, South Carolina Sen. Tim Scott said Trump’s retweet was “indefensible.””There’s no question, he should not have retweeted it,” said Scott, the only Black Republican in the Senate. “Certainly, the comment about the white power was offensive.”Sherrilyn Ifill, president and director-counsel of the NAACP Legal Defense Fund, reacted to the tweet on CBS’ Face the Nation on Sunday.”This is really not about the president taking it down,” the civil rights attorney said. “This is about the judgment of the president in putting it up. It’s about what the president believes. And it’s time for this country to really face that.”In recent weeks, Twitter has started flagging several of Trump’s tweets with warning labels.In late May, the social media platform placed a “public interest” notice for the first time on a Trump tweet, in response to the president’s controversial “when the looting starts, the shooting starts” tweet. It did so again last week for Trump’s tweet threatening “serious force” against protesters outside the White House.The “public interest” notice is used by the platform when “it may be in the public interest to allow people to view Tweets that would otherwise be taken down,” Twitter states. Both tweets were flagged for appearing to glorify violence.In mid-June, the platform flagged a video Trump tweeted as “manipulated media.” And in late May, Twitter added fact checks to two of Trump’s tweets about mail-in voting for the first time. It also marked the first time Trump faced Twitter sanctions on his account.Following the fact check, Twitter CEO Jack Dorsey said the company will “continue to point out incorrect or disputed information about elections globally.””Per our Civic Integrity Policy, the tweets yesterday may mislead people into thinking they don’t need to register to get a ballot (only registered voters receive ballots.) We’re updating the link on @readDonaldTrump’s tweet to make this more clear,” Dorsey said.