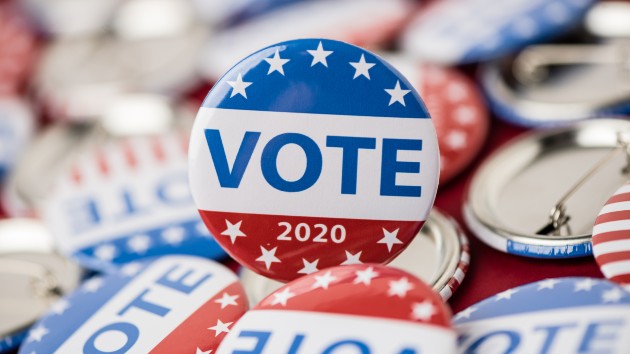 yorkfoto/iStockBy MEG CUNNINGHAM, ABC News(WASHINGTON) — A number of contentious down-ballot primaries are set to take place on Tuesday as the country nears the end of primary season — which was interrupted by the coronavirus pandemic — and looks ahead to November.In-person voting will only take place in Oklahoma, one of three states which designate Tuesday as election day. In Utah and Colorado, mail-voting has been in place since 2012 and 2013, respectively. Voters in Colorado are set to choose their Democratic Senate nominee on Tuesday, which will undoubtedly morph into one of the most closely watched general election races.In Utah, a crowded gubernatorial primary will wrap, where former Gov. John Huntsman is vying for his old seat.Further down the ballot, Republicans will choose a nominee to face off against freshman Democratic Rep. Ben McAdams, who holds Utah’s sole Democratic seat in Congress. In Oklahoma, Republicans are again voting to take on freshman Democrat Kendra Horn, who, alongside McAdams, flipped her seat in 2018. The two seats are among the closest watched races for national Republicans and Democrats.Party props up Senate race in Colorado, gubernatorial standoff in UtahFormer Colorado governor and 2020 presidential contender John Hickenlooper is fending off progressive insurgent and former state House Speaker Andrew Romanoff to take on Republican incumbent Sen. Cory Gardner in November.The race hasn’t been an easy one for Hickenlooper, who was widely thought to waltz through the primary with his statewide record and backing from the Democratic Senatorial Campaign Committee, among others. In early June, the Colorado Independent Ethics Commission fined Hickenlooper nearly $3,000 for ethics laws he violated during his time as governor. Days later, video surfaced of Hickenlooper comparing the workload of a politician to being a “rower” on an “ancient slave ship.” He also “stepped on (his) feet” during a racial justice forum, saying that “all lives matter” in late May. He’s since apologized for both gaffes, reiterating his support for the Black Lives Matter movement.Regardless, the comments opened the door for criticism from Romanoff, Gardner and his allies, who have gone on the air in recent weeks hitting Hickenlooper for them. Hickenlooper is still seen as the front-runner, but the race may end up being much closer than originally anticipated, according to political scientists and strategists in the state.Meanwhile, in the race in Utah to replace retiring Gov. Gary Herbert, former House Speaker Greg Hughes is targeting Lt. Gov. Spencer Cox, who has Herbert’s endorsement, with an entire page on his campaign website devoted to Cox’s past tweets, in an effort to undermine his support for President Donald Trump.Meanwhile former Utah Gov. Jon Huntsman is looking for an opening in the middle. Huntsman endorsed Trump in 2016, but by October, he called on him to bow out of the race after the release of the Access Hollywood tape. Still, he served as U.S. ambassador to Russia under Trump until he resigned in 2019 to run for governor.Republican Party Chairman Thomas Wright is also running for the Republican nomination in the deep-red state. All four candidates are backing Trump in his re-election, but still it is loyalty to the president that is defining this race.Down-ballot races look ahead to NovemberIn Colorado’s 3rd Congressional District, which is home to Pueblo County, a pivot county which voted for Barack Obama twice and then Trump, Democrats are hunkering down to try and flip the toss-up seat blue.Diane Mitsch Bush, the 2018 Democratic nominee, is running in the western Colorado district against James Iacino, who chairs the Seattle Fish Company. Bush lost to incumbent Rep. Scott Tipton 44% to 52% in 2018 — and has drawn on her history in the state House as a testament to her legislative record.Iacino hasn’t before held office, but was appointed by Hickenlooper to the Governor’s Fellowship program for the 2017-2018 year.In Oklahoma, Republicans have set their sights on the 5th Congressional District, in an attempt to turn the entire state’s House delegation back to red.The state’s only blue district, which encompasses the capital city, will be a tough seat for Horn to defend. In 2018, Horn became the first Democrat to represent the district in 44 years when she eked out a win over her Republican opponent. This year, a slew of Republicans are vying to take over, but with nine people in the running to challenge Horn, the primary is likely to go into an August runoff election.Three of the top fundraising GOP candidates in the race are women, which could reflect a broader political theme of Republicans hoping to recruit more women to join their ranks.State Sen. Stephanie Bice, a staunch Trump supporter, has raised the most money so far, and has the endorsement of New York Rep. Elise Stefanik. Bice is also part of the Republican Young Guns program, but has been on the receiving end of ads launched by the political arm of the Club for Growth that target her fiscal policy record while serving the state.In Utah’s 4th Congressional District, a crowded Republican primary has formed with four Republican contenders: Trent Christensen, a non-profit CEO; Kim Coleman, a conservative state representative; Jay McFarland, a former radio personality, and Burgess Owens, a former NFL player with the Oakland Raiders.The seat switched from red to blue in 2018, when McAdams defeated former Congresswoman Mia Love by 694 votes. Love endorsed Coleman in the primary, who is considered one of two front-runners in the race, along with Owens. The district will be the site of one of the most competitive House races in the fall, with the seat being one of the hardest for Democrats to defend and among some of the most likely to fall back into the GOP’s grip.Utah is expected to begin reporting results Tuesday night, as is Colorado, as the two states are vote-by-mail veterans. Oklahoma did limited absentee ballot expansion amid the coronavirus pandemic and will still hold vast in-person voting on Tuesday. Copyright © 2020, ABC Audio. All rights reserved.

CAREN Act proposed to criminalize discriminatory 911 calls in San Francisco
Florida State University faces backlash for memo saying it will ‘no longer allow employees’ to care for kids while working remotely
New Yorkers ‘no longer trust the police,’ state attorney general says
Trump threatens to ‘cut off funding’ for schools that don’t reopen amid pandemic
‘Game changer’: A shot every 2 months works better than a daily pill to prevent HIV, study says
It was nice to finally play a nice guy in ‘The Short History of the Long Road’, says Steven Ogg