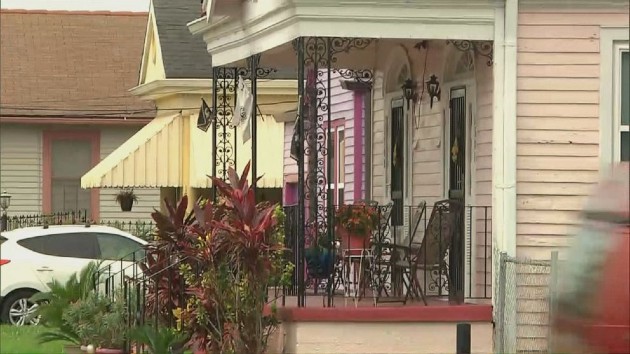 ABC NewsBy JON SCHLOSBERG and KAYNA WHITWORTH, ABC News(NEW ORLEANS) — As the coronavirus pandemic enters its fifth month, an increasing number of renters from across the country are facing a grim reality — possible eviction.In New Orleans, mothers like Shankya Phillips worry about their families and the roofs over their head.”Where do you get help from, where do you turn when you can’t turn to a shelter anymore, when the home you are living in, you can’t afford,” Phillips said. “It’s scary.”The 28-year-old mother of two is about to get evicted.”I just want people to know this is actually happening, that this is real life. Like, people are actually getting kicked down the street,” she told ABC News correspondent Kayna Whitworth.Phillips lives in an apartment that she describes as leaky, and has been unemployed since the clothing store she worked at shut down three months ago.The extra federal unemployment benefits of up to $600 a week, provided as part of the Coronavirus Aid, Relief and Economic Security (CARES) Act, will end at the end of July, leaving millions of unemployed Americans like Phillips in limbo.About 28 million Americans are at risk of eviction as a recession fueled by COVID-19 creates economic havoc across the country, according to new estimates from the real estate analytics firm Amherst Holdings.The 120-day moratorium on evictions in federally assisted housing properties mandated by the CARES Act is also set to expire on July 25. According to the Urban Institute, that moratorium covers roughly 12.3 million out of the 43.8 million rental units in the U.S. — one in four units.For the roughly three-quarters of American rental units that aren’t federally subsidized, eviction moratoriums are dependent on state and local governments. In Louisiana, the moratorium ended June 15.New Orleans is just one of an increasing number of places where protections for tenants are starting to phase out, even as cases rise in some areas.The eviction rate in New Orleans before COVID-19 was already twice the national average. In some neighborhoods, however, it was up to four times higher.Unemployment is now four times higher than before the pandemic. When coupled with the expiring federal benefits, Cashauna Hill, director of the Louisiana Fair Housing Action Center, is worried the city is on a collision course.”Folks here know what’s coming down the pike. We, unfortunately, have had more than our share of experience dealing with disasters and governmental failures,” Hill told ABC News.Hill and her staff are fighting to keep people like 53-year-old Lawyer Winfield in their homes.”You know there’s a certain comfort in having this little place… I can’t imagine being without it,” Winfield told ABC News.Southeast Louisiana Legal Services told ABC News it had seen a 100% increase in their eviction cases. Meanwhile, 41% of Louisiana renters said they were worried about being able to make June’s rent, according to the U.S. Census Bureau.Winfield says the housing crisis that has been impacting New Orleans for years should be taken seriously now.

“It must be treated as a crisis because of this pandemic,” he said.Without extended aid, housing rights advocates fear for what’s to come.”We’re really concerned that we’re going to see an avalanche of evictions as the courts open back up,” Hill said.But landlords are also feeling the strain.Kym Valene has been a landlord in the big easy for nearly 20 years and says she never had to evict someone until now.”I’m not a bad guy and I really like my tenants and take care of my property. But you’ve got to understand, you know, certain people are taking advantage of the situation,” she said.Valene is currently trying to remove a tenant who she says has not paid rent since the pandemic began and has a pit bull dog, which are illegal in the city.Valene says she wasn’t able to take action until the moratorium on evictions expired. In the end, she anticipates losing $15,000 and she says she still has to pay her mortgage, property taxes and insurance.Impending evictions have the city on edge and health leaders taking notice.”Every economic impact has a public health impact, and so, certainly putting people out of their homes would be devastating,” Dr. Jen Avengo, director of New Orleans’ Health Department, told ABC News.Avengo says she has been working on solutions to address New Orleans’ housing crisis for years, and the pandemic has only exacerbated the problem.”We need help and we need it soon,” she said.For mothers like Phillips, the dream is a simple one.”I want to raise my kids with a nice little fence in the front yard, and where my dog can run around and not have to worry about them getting shot,” Phillips said.But right now, that dream is out of reach.”It makes you want to leave New Orleans,” she said. “But who wants to leave the place they love?”