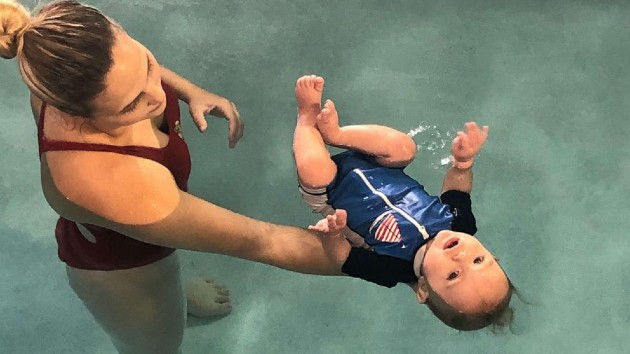 Krysta MeyerBy GENEVIEVE SHAW BROWN, ABC News(NEW YORK) — When Krysta Meyer posted a video of her 8-month-old’s swimming lesson to Tik Tok, she had no idea a decades-old technique taught to her son would draw worldwide attention. “I’m getting messages from overseas, from everywhere,” the Colorado-based Meyer, a mom of two, told ABC News’ Good Morning America.

And while the majority of messages were supportive and expressing awe as the baby surfaced from underwater, rolling onto his back to save himself from drowning, there was plenty of criticism too. The criticism, said the owner of Little Fins Swim School, in Colorado Springs, where Meyer’s sons, Oliver and Jace, take lessons, primarily is based in a misunderstanding. “They’re focused on Oliver being thrown into the pool,” Lauri Armstrong said. “But that’s something they work up to. That’s not the first day.”Oliver had been taking lessons for two months when the video was shot. His mom said the progression from day one to the video was a slow one. “First, they get comfortable in the water, then comfortable lying on their back, then lying on their backs with one hand, then keeping their chin up,” she said. “There’s a lot that happens before they are thrown in the water.”The method, called Infant Survival Swim, aims to teach children as young as 6 months to survive if the unimaginable happens and they find themselves alone in water.Armstrong was quick to point out the program is in no way intended to take the place of multiple other levels of water safety, the most important of which is having a designated adult watching a child at all times. According to the American Academy of Pediatrics, drowning is a leading cause of injury-related death in children. It was three stories in one day that led Meyer to continue on with lessons with her older son, Jace, even when it got hard.”He was 13 months when he started and had separation anxiety,” she said. “He cried constantly. It was miserable, and I hated being there [for swim lessons]. But the day we were going to stop the lessons I heard about two near-drownings and one actual drowning. So we stuck with it and eventually it got so much better.” Jace, now 3, is very comfortable in the water, his mom said. “It’s been so much easier with Oliver,” Meyer said, because he started when younger. Though the videos of babies able to save themselves are impressive, the effectiveness of the method is still in question. The AAP wrote on its website: “Children over age 1 may be at a lower risk of drowning if they have had some formal swimming instruction. However, there is no evidence that swimming lessons or water survival skills courses can prevent drowning in babies younger than 1 year of age.” But for Meyer, the lessons are well worth it. “Drowning used to be my biggest fear [for my children]. Now it’s not,” she told GMA. At Little Fins, babies and children are considered able to save themselves when they can float on their back independently for five minutes. Five minutes, Armstrong said, indicates a child could, in an emergency situation, float for as long as it takes to be found by an adult. Oliver, so far, can float for three minutes. The instructor in the video, Jill Armstrong, said once he can float for five minutes, the next step for Oliver and all kids at the same level is to get themselves to a wall or side of the pool and then eventually pull themselves out. No matter the method, Armstrong said, drowning prevention is the goal. “If our method is not a good fit, that’s fine, it’s not for every family,” she said. “No matter what water safety method you choose, that’s a good thing.” There are many additional water safety tips on the AAP website.Copyright © 2020, ABC Audio. All rights reserved.

Breaking down the Supreme Court nomination, confirmation process
Trump’s leadership is ‘opposite of racism’: Kim Klacik on ‘The View’
Black man beaten by Georgia deputy speaks out after release from jail: ‘I feared for my life’
Challenges aside, Emmy producers Reginald Hudlin and Ian Stewart say the show will be “great”
Coronavirus live updates: Controversial testing guidance ‘absolutely came from the CDC,’ official says
Chrissy Teigen reveals the sex of her unborn baby