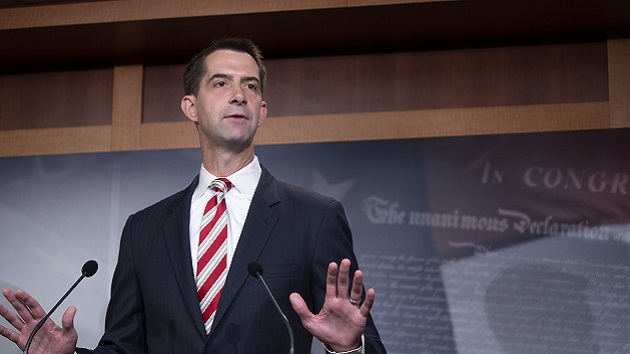 Tasos Katopodis/Getty ImagesBy BOBBY GEHLEN, ABC NEWS(WASHINGTON) — Sen. Tom Cotton, R-Ark., has introduced legislation to prohibit federal funds for public schools to teach The 1619 Project, an initiative from The New York Times Magazine that aims to teach Americans about the history of enslaved people in the United States.Cotton, a strong ally of President Donald Trump, drafted the “Saving American History Act of 2020″, claiming that America was founded on the ideals of the Declaration of Independence rather than on the history of enslaved people which began more than 100 years before the Declaration was signed. His bill would also make schools that teach The 1619 Project ineligible for federal professional-development grants.”The New York Times’s 1619 Project is a racially divisive, revisionist account of history that denies the noble principles of freedom and equality on which our nation was founded. Not a single cent of federal funding should go to indoctrinate young Americans with this left-wing garbage,” Cotton said in a release.Launched in August 2019 on the 400th anniversary of the first ship carrying enslaved Africans to land in the colony of Virginia, The 1619 Project puts the consequences of slavery and legacy of Black Americans at the forefront of American history.The Pulitzer Prize-winning collection is currently part of the curriculum in schools in Chicago, Washington, D.C., Newark, New Jersey, and Buffalo, New York, and its creator, Nikole Hannah-Jones, recently announced a partnership with Oprah to bring the lessons of The 1619 Project to film and television.In the first essay, Hannah-Jones writes, that “it would be historically inaccurate to reduce the contributions of black people to the vast material wealth created by our bondage. Black Americans have also been, and continue to be, foundational to the idea of American freedom.”Hannah-Jones retorted on Twitter following the bill’s release, saying Cotton’s effort “speaks to the power of journalism more than anything I’ve ever done in my career.”Cotton received criticism from some historians on social media as well.The bill and the criticism it is based on follows similar attacks from Trump.In an interview with Fox News’ Chris Wallace, Trump brought up the project when pressed on his claim that school children are taught to hate their country.”Now they want to change — 1492, Columbus discovered America. You know, we grew up, you grew up, we all did, that’s what we learned. Now they want to make it The 1619 project. Where did that come from? What does it represent? I don’t even know,” Trump said.”It’s slavery,” Wallace replied.”That’s what they’re saying, but they don’t even know,” Trump claimed. “They want you to believe America’s institutions continue to reflect the country’s acceptance of slavery at our founding. They want you to believe that Marxist ideology that America is only the oppressors and the oppressed.”Secretary of State Mike Pompeo has also accused The New York Times of “Marxist ideology” that makes the Chinese Communist Party “gleeful” with its 1619 Project.The legislation is unlikely to gain significant traction on the Senate floor.ABC’s Elizabeth Thomas and Conor Finnegan contributed to this report.Copyright © 2020, ABC Audio. All rights reserved.