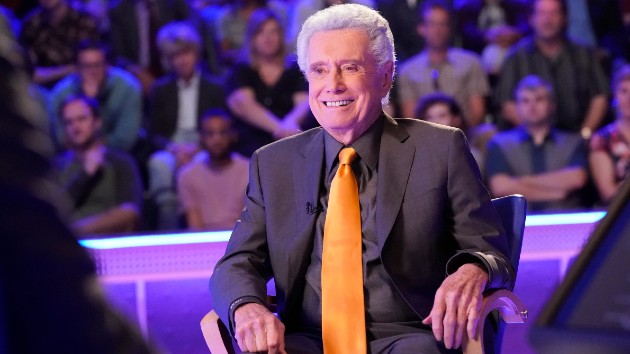 In a statement Saturday, his family said, “We are deeply saddened to share that our beloved Regis Philbin passed away last night of natural causes, one month shy of his 89th birthday.”

“His family and friends are forever grateful for the time we got to spend with him — for his warmth, his legendary sense of humor, and his singular ability to make every day into something worth talking about,” the statement continued.  “We thank his fans and admirers for their incredible support over his 60-year career and ask for privacy as we mourn his loss.”

Philbin got his first network TV exposure starting in 1967, as Joey Bishop’s sidekick on The Joey Bishop Show. He continued to host a variety of local TV shows in L.A., and a network show with Mary Hart.

In 1983, Philbin moved to New York City to co-host The Morning Show for WABC-TV with Cynthia Garvey. After Garvey left, Regis was paired with Kathie Lee Johnson — later Gifford — and the ratings were so good that the show was nationally syndicated in 1988 as Live! with Regis & Kathie Lee.

After 15 years, Gifford departed and in 2001, the show was renamed Live! with Regis and Kelly, with Kelly Ripa joining as co-host.  In November of 2011, Philbin left the show after 23 years.  He was replaced by Michael Strahan, who was then replaced by the current co-host, Ryan Seacrest.

From 1999 to 2002, Philbin also pulled double duty as the original host of the wildly popular game show Who Wants to Be a Millionaire.  In addition to numerous guest-host spots, he also hosted Million Dollar Password, the first season of America’s Got Talent, and the finale of The Apprentice 2 — he and Donald Trump were friends.

Philbin is survived by his beloved wife, Joy, their daughters JJ and Joanna, and daughter Amy Philbin, whom he shared with his first wife, Catherine.  He and Catherine also had a son, Daniel, who died in 2014.

In a statement, Kelly Ripa and Ryan Seacrest said, “We are beyond saddened to learn about the loss of Regis Philbin. He was the ultimate class act, bringing his laughter and joy into our homes everyday on Live for more than 23 years.”

“We were beyond lucky to have him as a mentor in our careers and aspire everyday to fill his shoes on the show,” they added. “We send our deepest love and condolences to his family and hope they can find some comfort in knowing he left the world a better place.”

President Donald Trump, Regis’ longtime friend, tweeted, “One of the greats in the history of television, Regis Philbin has passed on to even greater airwaves, at 88. He was a fantastic person, and my friend. He kept telling me to run for President. Holds the record for ‘most live television,’ and he did it well.” Trump wrote.”Regis, we love you……..And to Joy, his wonderful wife who he loved so much, my warmest condolences!!!”