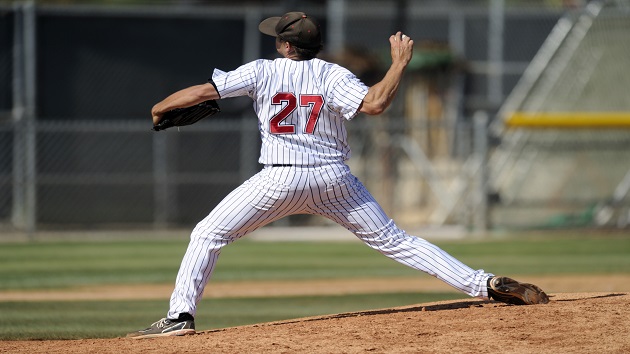 Matt_Brown/iStockBy: ERIC MOLLO, ABC News(NEW YORK) – Major league ballplayers have gotten into full swing with the 2020 season officially underway. Even though the pandemic shut down spring training, professional pitchers were still throwing a lot in preparation for a shortened season amid the pandemic.High school pitchers were also prepping for what was supposed to be their spring leagues. Under normal circumstances, players at the high school level would be in the midst of a long year of throwing dating back to fall ball. They pitch through winter workouts, their spring seasons, and what would have been summer ball.Pitchers’ arms in particular are tired after throwing fastballs with full force and curve balls using a twisting arm motion to get the ball to break and spin. Pitchers can throw over 100 times a day on game days, while also lightly tossing on off days. Then, there are the elite pitchers, who also participate in club leagues and showcase tournaments hoping to make it to the college level.It is a lot of throwing. Over the past two decades, doctors have seen an uptick in Tommy John surgeries among youth pitchers, which are performed after an athlete tears the ulnar collateral ligament in the elbow. With so many operations, sports doctors have said Tommy John surgery has become an epidemic among high school pitchers. A 2015 study in the American Journal of Sports Medicine found athletes between the ages of 15 to 19 accounted for 56.8% of all Tommy John procedures.Dr. Jeffrey Dugas is an orthopedic surgeon with the Andrews Sports Medicine & Orthopedic Center in Alabama. He told ABC’s Todd Ant on the “Perspective” podcast that about 20% of all procedures he performs are of the “Tommy John-type,” and all of that throwing takes its toll on young arms:“I would say it’s still an epidemic. The problem that we see, though, is that it’s going younger. Over the last decade I do think that the curve has flattened a little bit in terms of just the raw number of cases that we see. I definitely do not think it has gone backwards. I do think it is still climbing… The vast majority of UCL injuries occur in high school athletes. That’s also the most at-risk population because they are still skeletally immature. In a study that we did recently on the UCL repair, the average age was 18, and that means that ranged from 12 to 30.”Dr. Christopher Ahmad, the attending orthopedic surgeon at the New York Presbyterian Columbia University Medical Center and team physician for the New York Yankees, says now that high school kids have access to professional pitching coaches and facilities, they are more at-risk:“Essentially, they’re training with young bodies, just like professionals who would have already built up the foundation of being prepared for the intensity of training at their professional level. A 14-year-old is doing strength and conditioning. They’re putting so much stress on their body and they’re competing at higher levels where every time they play, they sense that they have to win. That’s created an atmosphere of increased injury because of this pressure to compete and perform earlier in your life than you normally would have been, say, 30 years ago.”Like Dr. Dugas, Dr. Ahmad says the athletes who are undergoing Tommy John surgery continue to skew young.Dr. Frank Jobe performed the first ulnar collateral ligament reconstruction on Los Angeles Dodgers pitcher Tommy John in 1974. The revolutionary surgical operation was a resounding success that allowed John to pitch at the Major League level for many years afterwards.Tommy John spoke to ABC Radio about his injury and the subsequent surgery:“I threw the fateful pitch July 17th, 1974. Something was very, very, very wrong. Dr. Jobe examined me. He said, ‘Let’s let it rest for six, seven weeks, and then if we’re lucky, it’ll heal. Then, you start back slowly and you know, and you’ll be able to pitch the rest of the season.’ Well, I did that and I couldn’t.”High school varsity coach John Sheppard at Morristown Beard in New Jersey has been working with young pitchers for over 25 years, and he believes curveballs may be putting some extra stress on amateur arms. His brother, Rob Shepherd, runs a successful baseball program as head coach at Seton Hall University. He believes young arms should be monitored closely before reaching the college level:“I think the responsibility is on the coach to make sure that they’re utilizing the players correctly. If you ask a player if he’s OK, he’s going to tell you he’s OK. So, I think the key is with the parents as well as a coach.”The long layoff for so many amateur baseball players due to the coronavirus pandemic could negatively affect these young arms when it comes time to play again. Dr. Dugas has some recommendations for youth players hoping to get back on the mound next spring or summer:“It’s all about not throwing fatigued. Pitch count is very important, but you’ll see a kid the first day throw 100 pitches, having just come off of a period of time off. That’s not OK. That interval throwing program, that strengthening program, that time to get the body ready is really important.”Dr. Ahmad advises pitchers to get proper rest, stick to a reasonable pitch count, and never play with elbow pain:“The ligament is like a wire hanger and if you bend it enough times, it will finally break… The way we try to manage this is we try to develop a culture now around our young kids where it’s not okay to throw if you’re having elbow pain. You should have a relationship with your parents and your coaches that allows you to express that your elbow doesn’t feel good and have the ability to rest and recover before you put too many bends in that wire hanger, which will mean that it’ll break later on in life.”Listen to the rest of this past week’s highlights from Perspective here.Copyright © 2020, ABC Audio. All rights reserved.