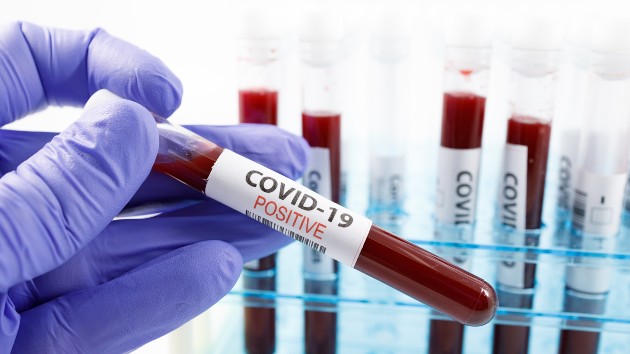 Ovidiu Dugulan/iStockBy MEREDITH DELISO, ABC News(JEFFERSON CITY, Mo.) — Missouri health officials are urging residents to take “aggressive actions” following nearly a week in which daily COVID-19 cases have reached four figures.On Sunday, the state had its sixth straight day of more than 1,000 new cases, with 1,218. A four-day streak of record-breaking numbers of new cases peaked at 1,652 on Friday.There are 41,927 total confirmed cases of COVID-19 in Missouri and 1,197 deaths, according to the state health department. The seven-day rolling average of positive tests is 8.8%.”We’re trending up,” Dr. Randall Williams, director of the state’s health department, said Wednesday at Missouri Gov. Mike Parson’s coronavirus briefing. The 1,000-plus numbers likely represent community transmission, primarily among 20- and 30-year-olds, Williams said.The average age of those contracting COVID-19 has been steadily declining, according to the Missouri Department of Health and Senior Services. As of Sunday, the average age of a COVID-19 patient in the state is 43; the seven-day rolling average is 40.Daily hospitalization data on the state’s COVID-19 dashboard has not been updated since July 12, though Williams said those numbers are also “trending up.” The lag in reporting is due to a change in how data is collected, after the White House switched data collection from the Centers for Disease Control and Prevention to a private firm earlier this month. As a result, the Missouri Hospital Association said it has been left “in the dark” and unable to access state data.Williams said he expects to have updated hospitalization figures this week.

A call to ‘mask up’Missouri started reopening its economy on May 4, with the governor allowing the state to fully reopen starting June 16. There is no statewide mask mandate, though several local jurisdictions, including St. Louis County and Kansas City, Missouri, have issued their own orders as COVID-19 cases have started to rise in recent weeks.The Missouri Hospital Association is also among a coalition of eight state organizations urging residents to “mask up” amid the increase, pointing to recommendations from the Centers for Disease Control and Prevention to wear cloth face coverings in public to help limit the spread of COVID-19.”Missouri’s stay-at-home order helped reduce transmission of the virus. However, with many regions of the state opening, Missouri’s transmission rates have been rising,” the association said in a statement. “Missourians can protect themselves, their families and members of the community by wearing a mask when in public and when in contact with at-risk individuals.”In a grim letter to the public released Friday, several health officials in the Kansas City region, including two in Missouri, urged residents to take steps to limit the spread of the disease due to recent data that suggests they are “losing the battle with COVID-19,” the letter said.”We are extremely concerned that hospitalizations will continue to escalate in the coming weeks and months, and that the uncontrolled spread of COVID-19 will lead to increasing ventilator use and deaths,” said the letter, which stressed mask-wearing indoors and when social distancing is not possible. “This is our best option right now for protecting our friends, families, neighbors and the economy.”One oft-cited example of the value of mask-wearing happened right in Missouri: After two symptomatic hairdressers potentially exposed 140 customers to COVID-19 in May, the county health department determined that no new cases were linked to the Springfield salon. Both hairstylists and all clients were wearing face coverings at the time, officials said.

Missouri’s COVID-19 epicenterThe hardest-hit county in Missouri is its most populous one: St. Louis. As of Sunday, the county had about a quarter of the state’s COVID-19 cases, with 10,995, based on state data. During the first two weeks of July, the average number of new COVID-19 cases more than doubled, according to a July 23 report from the St. Louis County Health Department. Hospitalizations increased by 73% during that period, it found. The overall testing positivity rate has been gradually climbing since mid-June, the report stated.With a record numbers of new cases in recent days, county officials have warned they are considering reimposing restrictions. At a coronavirus briefing on Friday, St. Louis County Executive Sam Page said that the county would start “talking about restrictions” when daily hospital admissions hit 40.

That number has been hovering around there in recent days. On Sunday, the St. Louis Metropolitan Pandemic Task Force reported daily new hospitalizations at 36, down from 40 on Thursday. The seven-day moving average of new hospitalizations was 40 on Sunday, continuing an upward trend in the county.”We’re in a difficult place right now, and we do need to be taking some aggressive actions as a community to turn the curve around,” task force head Dr. Alex Garza said Friday at a coronavirus briefing. “We have a lot of transmission in our community. It is still being driven by our younger population.”Last week, the county announced that it would be pausing youth summer league competitions, such as games and scrimmages, due to rising cases among children ages 10-19.”While the risk of transmission during competitive youth sports games is most likely low, all of the activities surrounding the games increase the likelihood of spreading the virus. This includes teams, coaches and parents gathering before, during and after games and practices, carpooling and other activities associated with participating in sports teams, especially if proper mitigation practices are not in place,” the St. Louis County Department of Public Health, the St. Louis Sports Medicine COVID-19 Task Force and the city of St. Louis said in a joint statement released Thursday.

The guidelines only apply to summer sports, officials said.Garza stressed “decisive actions,” such as mask-wearing, social distancing and not congregating in large groups, to help reduce the curve and keep hospital admissions down in the region.In a confluence of COVID-19 concerns, one recent outbreak in the state has been tied to a large gathering of young people. The Jackson County Health Department said on Friday it had traced five cases of the virus to a July 10 high school party attended by anywhere from 100 to 200 students.The department is recommending that all those who attended get tested for the virus. Under the county’s current guidelines, gatherings are limited to 100 people. Copyright © 2020, ABC Audio. All rights reserved.