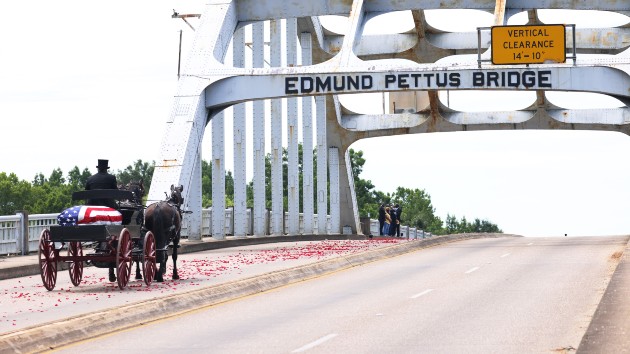 Michael M. Santiago/Getty ImagesBy BILL HUTCHINSON, ABC News(SELMA, Ala.) — More than five decades after he was slammed in the head by a white state trooper’s billy club while he led a march on behalf of Rev. Martin Luther King Jr. across the Edmund Pettus Bridge in Selma, Alabama, the late Rep. John Lewis made one last crossing on Sunday.In an emotional ceremony that symbolizes the 80-year-old Lewis’ lifelong work for civil rights, hundreds of mourners watched the procession escort the congressman’s casket across the 1,284-foot bridge spanning the Alabama River. A horse-drawn caisson carried Lewis’ casket alone across the bridge.In an act that Alabama Rep. Terri Sewell described as “poetic justice,” Alabama state troopers saluted Lewis’ casket, draped in an American flag, as it crossed the bridge.The somber journey brought Lewis full-circle to the spot where he almost died as a 25-year-old on March 7, 1965, when Alabama state troopers attacked him and other civil rights demonstrators in an incident that became known as “Bloody Sunday.” Lewis’ skull was fractured in the ordeal in which then-Alabama Gov. George Wallace ordered troopers to use all the force necessary to stop the marchers from reaching their destination at the state capitol building in Montgomery.”I was hit with a billy club, and I saw the state trooper that hit me,” Lewis, who was first elected in 1987 to represent Georgia’s 5th Congressional District, would recall later during a federal hearing. “I was hit twice, once when I was lying down and was attempting to get up.”In subsequent interviews, Lewis said, “I thought I saw death. I thought I was going to die.”The moment that Lewis was attacked was captured in news photographs that opened the eyes of the world on the brutality civil rights marchers were enduring in the South in a quest for voting rights and equality for Black Americans.”Our nation is better off because of John Robert Lewis. My life is better. Selma is better. This nation and this world are better because of John Robert Lewis,” Sewell said in a brief service outside the Brown Chapel A.M.E. Church in Selma. “John was determined to fight for equality and justice, putting his own life on the line in the service of others, and a brighter future for everyone. John crossed bridges so many times, insisting our nation live up to the ideals on which it was founded.”A nine-member military honor guard carried Lewis casket from the church to the horse-drawn caisson.Mourners lining the streets leading up to the bridge shouted “We love you” and “We got this,” vowing to carry on Lewis’ work for equality and racial justice.Sunday’s tribute to Lewis came during a six-day celebration of the man who became known as the “conscience of the U.S. Congress.”It also occurred as protests against police brutality continued throughout the country in the wake of the police-involved death of George Floyd in Minneapolis.The driver of the caisson carrying Lewis’ casket paused at the top of the bridge, where in 1965 Lewis described meeting a sea of blue state troopers and decided to march into the face of the violent confrontation. The driver stood and removed his black top hat for a moment of silence before carrying on.Members of Lewis’ family, including his son, John-Miles Lewis, met the caisson and fell in line behind the casket for the final steps across the bridge.The Pettus bridge is named after a Confederate Army general, U.S. senator and Klu Klux Klan leader. A movement has been underway to change the name of the bridge to honor Lewis, who along with civil rights activist Hosea Williams led the 1965 march across the span on behalf of Rev. King, who could not attend.Sunday’s bridge crossing commenced a day after Lewis was eulogized in his hometown of Troy, Alabama.Sunday’s march started at Brown Chapel A.M.E. Church in an event titled “#Good Trouble: Courage, Sacrifice & the Long March for Freedom.”Lewis’ body was scheduled to be taken later Sunday to Alabama State Capitol in Montgomery to lie in repose.House Speaker Nancy Pelosi and Senate Majority Leader Mitch McConnell announced last week that Lewis will be honored in a private ceremony in the U.S. Capitol Rotunda on Monday, followed by an unprecedented public viewing taking place outside, as opposed to inside, the Capitol building due to coronavirus concerns on Monday night and Tuesday.Lewis will lie in state at the top of the East Front Steps of the U.S. Capitol for the two-day public viewing.Lewis died on July 17, seven months after a routine medical visit revealed that he had stage 4 pancreatic cancer.He will be laid to rest on Thursday at South View Cemetery in Atlanta following a private funeral at Atlanta’s historic Ebenezer Baptist Church, which the Rev. Martin Luther King Jr. once led.