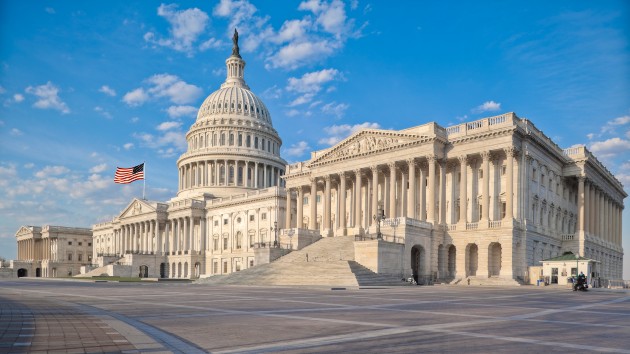 drnadig/iStockBy TRISH TURNER, ABC News(WASHINGTON) — Senate Republican leaders and the White House appear to have overcome their differences and are poised to introduce their next coronavirus relief plan on Monday afternoon.Treasury Secretary Steven Mnuchin and White House Chief of Staff Mark Meadows spent the weekend on Capitol Hill working through details of the proposal with Senate GOP leadership staff.”We’ve got an agreement in principle,” Meadows told reporters late Sunday, saying that staff was still putting the “finishing touches” on the proposal. “We have a few modifications that we’re looking for clarity on, but we’ve gotten those down to a handful that hopefully will be resolved in the next hour or so.”The $1 trillion plan is expected to reduce the federal unemployment benefit to about $200 per week, on average, or 70% of the wages a worker earned before ending up jobless. It would also provide $105 billion for schools, $70 billion of which would go to K-12 institutions with more going to schools that reopen; it would give $16 billion more for virus testing and tracing; it would provide another round of popular stimulus checks; it would include a second, more targeted round of forgivable loans from the Paycheck Protection Program for small businesses; and it would provide tax credits for businesses to help with rehiring and reopening.President Donald Trump had insisted on a payroll tax cut, which caused some delay, but after the pitch met with opposition from many Republicans and Democrats alike, the proposal was dropped. Mnuchin acknowledged over the weekend that the tax incentive did not provide immediate relief, unlike the planned second round of direct payments to Americans with modest incomes. Likewise, the administration caved on an effort to zero out any new funding for testing, tracing and the major federal health agencies involved in fighting the pandemic.White House officials have shown a new sense of urgency after weeks of delay, with Meadows pitching a piecemeal approach that might speed some benefits — like those for the jobless — that are about to expire, while not addressing others, like the moratorium on evictions that expired this weekend. But to date, the incremental approach has been rejected by House Speaker Nancy Pelosi.”Honestly, I see us being able to provide unemployment insurance; maybe a retention credit to keep people from being displaced or brought back into the workplace; helping with our schools,” Meadows said. “If we can do that, along with liability protection, perhaps we put that forward, get that passed, and we can negotiate on the rest of the bill in the weeks to come.””For them to come now, when we’re right on the brink,” Pelosi scoffed in a CBS interview, referring to expiring federal assistance, “we have been ready for two months and 10 days.” The House passed a $3 trillion coronavirus aid bill in May that included additional aid for state and local governments, schools, and virus testing, but it was not taken up by the Senate.Senate Majority Leader Mitch McConnell is expected to unveil the new GOP proposal in a Senate floor speech Monday afternoon, according to Meadows and GOP leadership aides, after which negotiations with Democrats can begin in earnest.But the two sides remain far apart, and over the weekend, McConnell made it clear that a resolution will take time — even with deadlines for jobless benefits and a moratorium on evictions expiring.”Hopefully in the next two to three weeks we’ll be able to come together and pass something that we can send over to the House and down to the president for signature,” McConnell said.Pelosi did not rule out reducing the federal unemployment benefit, but she was adamant that Congress cannot leave on its long-planned August recess without an agreement.”We can’t go home without it,” Pelosi told CBS’ Face the Nation.