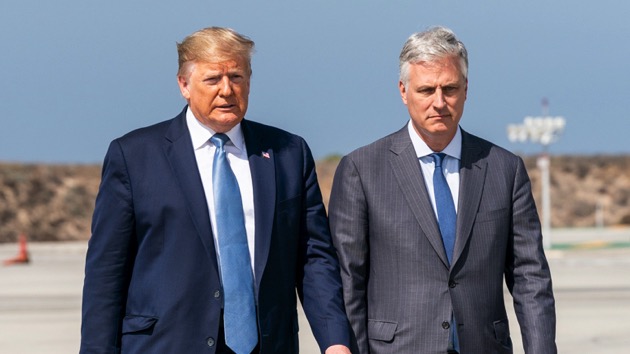 Official White House Photo by Shealah CraigheadBy BEN GITTLESON and LIBBY CATHEY, ABC News(WASHINGTON) — Robert O’Brien, President Donald Trump’s national security adviser, has tested positive for COVID-19, making him the highest profile Trump official to contract the novel virus, the White House confirmed.”National Security Adviser Robert O’Brien tested positive for COVID-19. He has mild symptoms and has been self-isolating and working from a secure location off site. There is no risk of exposure to the President or the Vice President. The work of the National Security Council continues uninterrupted,” the White House said in a statement Monday morning.It comes as new coronavirus cases and hospitalizations surge across the American South and West.It’s unclear how O’Brien was exposed to the coronavirus or how much in-person contact he’s had recently with Trump.Administration officials close to the president are regularly tested for COVID-19.O’Brien’s National Security Council office in the White House is near the Oval Office and Vice President Mike Pence’s West Wing office.O’Brien is the highest ranking official close to the president to contract the virus — but he’s not the first person connected to the Trump administration to test positive for the coronavirus.Kimberly Guilfoyle, who is dating the president’s eldest son, Donald Trump Jr., tested positive for the coronavirus while in South Dakota ahead of Trump’s Mount Rushmore event in early July.Pence’s press secretary, Katie Miller, wife to the president’s senior adviser Stephen Miller, also tested positive in May.Also back in May, a U.S. military service member who works at the White House campus and serves as a valet to the president — bringing him his lunch among other service items — also tested positive for COVID-19.Dozens of Secret Service officers and agents who were on site for President Trump’s June rally in Tulsa were ordered to self-quarantine last week after two of their colleagues tested positive.At least eight of President Trump’s campaign staffers have also tested positive — two of them getting positive results after attending the Tulsa rally, the Trump campaign confirmed to ABC News.There have been 16.2 million cases of the coronavirus worldwide since the pandemic began earlier this year, with 146,935 deaths in the U.S., according to data from Johns Hopkins University. Copyright © 2020, ABC Audio. All rights reserved.