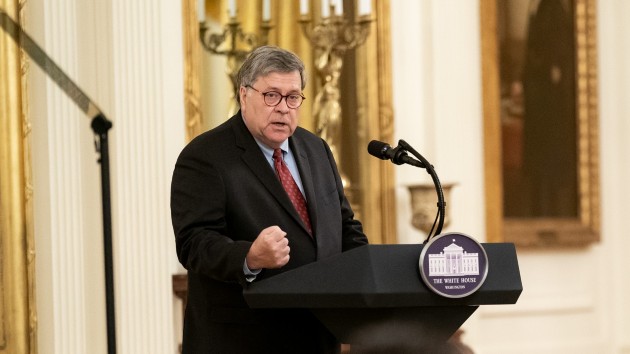 Official White House Photo by Tia DufourBy ALEXANDER MALLIN, KATHERINE FAULDERS and LUKE BARR, ABC News(WASHINGTON) — Attorney General William Barr is set to testify before the House Judiciary Committee Tuesday for the first time in his year-and-a-half long tenure as the nation’s top law enforcement official.Democrats hope to grill him over a long list of controversies and his repeated interventions in matters of interest to President Donald Trump.Barr’s appearance follows more than a year of stand-offs and delays — he hasn’t appeared before any congressional committee since May 2019 when he testified to a Senate panel on his handling of former special counsel Robert Mueller’s report on Russia’s interference in the 2016 election — later declining to appear before the House.Here’s how the hearing unfolded, please refresh this page for updates:9:38 a.m. Hearing delayed after Nadler in car accidentA committee source confirms House Judiciary Committee Chairman Jerry Nadler, D-N.Y., was in a car accident on his was to the hearing, but he is okay and was en route to Capitol Hill in a cab.The car hit something, but Nadler is not injured.The hearing will be delayed for at least 45 minutes. Copyright © 2020, ABC Audio. All rights reserved.