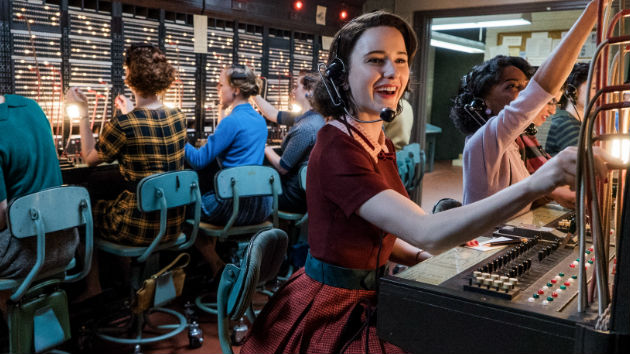 Brosnahan in “Mrs Maisel” – Amazon Studios/Nicole Rivelli(LOS ANGELES) — Via a virtual ceremony that streamed this morning at 11:30 a.m. ET/8:30 a.m. PT, Saturday Night Live veteran Leslie Jones and others revealed this year’s Emmy nominees, and the lucky chosen quickly took to social media to comment on the news.

HBO’s Watchmen won the day, with 26 nominations. One of those was for Yahya Abdul-Mateen II, who played Dr. Manhattan in the series. He attached a grinning picture of himself with a heartfelt note on Twitter, thanking the Television Academy as well as the cast, crew and fans of Watchmen. “I can’t stop smiling,” he said.

The just-concluded comedy series Schitt’s Creek was nominated for 15 Emmys, leading to the show’s own Twitter feed to comment, “We are currently trying to process this news.”

Responding to this, the show’s nominated co-star, Dan Levy, noted, “for once, i am speechless.”

Hugh Jackman, nominated in the lead actor category for his role in the HBO movie Bad Education, shared a thumbs-up photo of him in character as his reaction to the news.

Emmy-winner Billy Porter, nominated again for Pose in the lead actor in a drama series category, said, “It’s blessing and a gift to be part of this moment where my art and my activism meet.” He added, “POSE represents hope and is a reminder of how powerful ‘we-the-people’ are!”Jonathan Van Ness shared a screenshot of himself trying to FaceTime his fellow Queer Eye hosts, Bobby Berk, Karamo Brown, Tan France and Antoni Porowski. “Y’all answer your phone!! We’re Emmy nominees,” he tweeted.

Mark Ruffalo said he had “enormous gratitude” for being nominated in the best actor in a limited series category for I Know This Much Is True, in which he played twins, thanking its writer and director, Derek Cianfrance, for creating a project “that will stand the test of time.”

Ruffalo’s fellow Avenger, Don Cheadle, said simply of his own nomination, in the outstanding actor in a comedy series category for Black Friday: “thanks, y’all.”

Sterling K. Brown celebrated the Television Academy for nominating him twice — once for This Is Us and once for The Marvelous Mrs. Maisel — by saying it’s “2 Good to be True!”RuPaul Charles, host of RuPaul’s Drag Race, reacted to his show being nominated for five consecutive years, saying in part, “Thank you Television Academy. I am humbled and grateful to work with the best queens, cast, and crew in television…Together with World of Wonder and VH1, I dedicate these nominations to anyone who has been told you’re too queer, too black, or too different to achieve your dreams.”William Jackson Harper reacted to being nominated for The Good Place by sharing a video captioned “WHAT!?” In it, he understated, “It’s been quite a morning.”Samira Wiley reacted to being nominated for The Handmaid’s Tale, writing: “With so many crazy things happening in the world, this was such a joy to wake up to. Thank you.”Patton Oswalt said he was “blown away” to be nominated for his Netflix comedy special I Love Everything among “purely creative, brilliant, game-changing minds” like fellow nominees including Dave Chappelle and John Mulaney. Patton joked about what he will wear for a potentially virtual ceremony: “Off to buy a tuxedo shirt, jacket, and really nice pair of shorts and flip-flops. #Emmys”

The 72nd Emmy Awards will will be broadcast Sunday, Sept. 20 starting at 8 p.m. Eastern time on ABC.  Jimmy Kimmel is slated to host the event.  As of now, that ceremony will likely also be virtual.