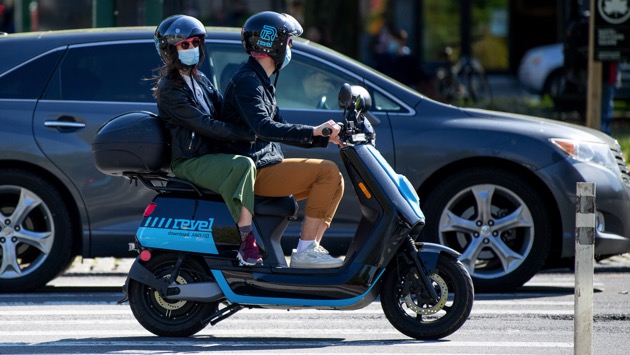 Roy Rochlin/Getty ImagesBy IVAN PEREIRA, ABC News(NEW YORK) — Revel said Tuesday it would shut down its operations in New York City until further notice hours after the city recorded the second fatality related to the moped share company in less than two weeks.Around 3:15 a.m., Jeremy Malave, 32, was traveling on a Queens roadway on the electric moped when he lost control and struck a light pole, a NYPD spokeswoman told ABC News. Malave was pronounced dead at a nearby hospital, according to the police. Malave’s death comes 10 days after WCBS reporter Nina Kapur was killed while riding a Revel moped in Brooklyn.Mayor Bill de Blasio expressed frustration with Revel over its safety measures and recent string of accidents and said he had a conversation with its leaders Tuesday morning. At 10 a.m. Revel tweeted that it would be shut down its service in New York City as it reviews and strengthens its “rider accountability and safety measures.””We’re actively communicating with city officials and look forward to serving the New York City community again in the near future,” the company tweeted.A spokeswoman for Revel told ABC News it would not comment further on the matter.Revel launched two years ago in New York City and offered users access to an electric moped that could be used in Queens and Brooklyn. It eventually expanded the number of bikes in New York and launched in other cities including Washington, D.C., and Miami.Users must be over 21, have a valid driver’s license and pay a registration fee. The rider must pay a dollar to unlock the bike with an app and pay 35 cents per minute of use.Two helmets are included for users and the service offers free in-person lessons on how to ride the bike, according to the company’s rules. Revel also urges riders to use the bike lane.Despite those precautions, New York leaders have been critical about the service in light of recent accidents and over sightings of Revel riders without helmets.

Transportation alternatives are important but safety on our streets is paramount. We spoke with Revel this morning and they are shutting down until we can find a way to make shared mopeds safe.

“This is pretty new in our city and the results have been painful,” de Blasio said Tuesday during his daily press briefing.Over the weekend, a 30-year-old rider was hospitalized in critical condition after crashing into a pole while on the moped in Manhattan, according to police. De Blasio said there have been other minor accidents reported in recent weeks.Revel addressed the concerns in an email to its New York users earlier in the month, with the subject line, “Hey NY, we need to talk …” The company said it had suspended 1,000 accounts for violating its safety rules.”When people misuse Revel it reflects poorly on every one of us,” the email said.Mayor de Blasio slammed Revel over the accidents and said it would have to come up with a stronger safety policy before it can allow for rentals in the city. He acknowledged that New Yorkers have been looking for alternatives to mass transit due to coronavirus concerns, but he said there were too many Revel users who didn’t know how to properly ride a moped in traffic.”I’ve been very clear to Revel that they cannot operate in this city unless it is safe,” he said.Copyright © 2020, ABC Audio. All rights reserved.