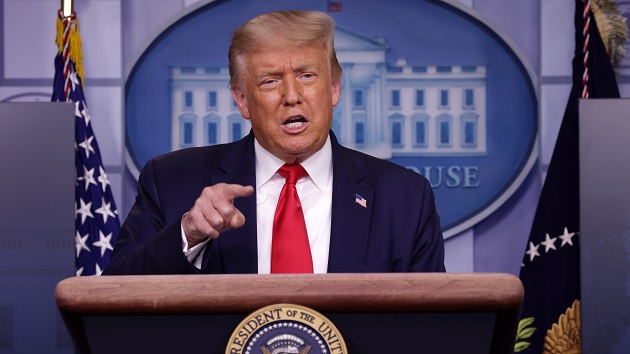 Alex Wong/Getty ImagesBy BEN GITTLESON, JORDYN PHELPS, and LIBBY CATHEY, ABC News(WASHINGTON) — As the U.S. neared 150,000 deaths from the novel coronavirus, President Donald Trump doubled down on his defense of an unproven drug to treat COVID-19 and offered a rosy picture of the growing public health crisis and of what is to come.”We’re seeing improvements across the major metro areas and most hot spots. You can look at large portions of our country, it’s — it’s corona-free,” Trump said Tuesday afternoon. “But we are watching very carefully California, Arizona, Texas and most of Florida is starting to head down in the right direction — and I think you’ll see it rapidly head down very soon.”Trump went on to rattle off a list of efforts his administration has taken to curb the coronavirus, after touting that he was invoking the Defense Production Act to spur generic drug manufacturing in the U.S. in response to the pandemic.The briefing comes amid a broadened rift between Trump and several of his top public health officials and follows the president’s recent social media promotion of hydroxychloroquine, a drug still unproven to treat COVID-19 despite his push.Asked to clarify his position on the efficacy of hydroxychloroquine, Trump said that “many doctors think it is extremely successful.””I took it for a 14-day period, and I’m here. Right? I’m here,” he said. “I don’t think you lose anything by doing it, other than politically. It doesn’t seem to be too popular you know why? Because I recommend it.”Notably, the National Institutes of Health abandoned clinical trials of the drug in June, reporting it “was very unlikely to be beneficial to hospitalized patients with COVID-19,” and the Food and Drug Administration in July revoked its emergency use authorization, warning it can cause “heart rhythm problems and other safety issues, including blood and lymph system disorders, kidney injuries and liver problems and failure.”The nation’s top infectious disease expert, Dr. Anthony Fauci, reiterated earlier Tuesday that the drug “is not effective” in treating the virus, while FDA Commissioner Dr. Stephen Hahn has recently lamented that it has become “politicized” in the midst of a pandemic.”The overwhelming, prevailing clinical trials that have looked at the efficacy of hydroxychloroquine have indicated that it is not effective in coronavirus disease,” Fauci told ABC News Chief Anchor George Stephanopoulos on “Good Morning America,” just hours after the president’s retweet Monday night.In the video that Trump retweeted, his son directly shared and which Twitter later removed for violating its “misinformation policy,” a group of what appeared to be doctors downplayed the effectiveness of masks and lockdowns and praised hydroxychloroquine.Asked if he believes Fauci misled the country on hydroxychloroquine, as some of his Monday night retweets read — along with the hashtag “Fire Fauci” — Trump said “no — not at all,” adding he didn’t know Fauci’s stance on the drug before applauding the doctor’s “high approval rating.””He’s got a very good approval rating, and I like that — it’s good — because remember, he’s working for this administration,” Trump said. “He’s got this high approval rating, so why don’t I have a high approval rating with respect — and the administration — with respect to the virus?””It sort of is curious a man works for us — with us — very closely, Dr. Fauci — and Dr. (Deborah) Birx, also highly thought of — and yet they’re highly thought of, but nobody likes me,” Trump added. “It can only be my personality, that’s all.”Earlier Tuesday, the federal government announced a $765 million agreement to turn Kodak into a pharmaceutical company to produce ingredients for generic drugs. The deal will enable Kodak to produce a quarter of all active ingredients for drugs in the U.S. in four to five years, according to administration officials.Trump called it “one of the most important deals in the history of U.S. pharmaceutical industries.”Copyright © 2020, ABC Audio. All rights reserved.