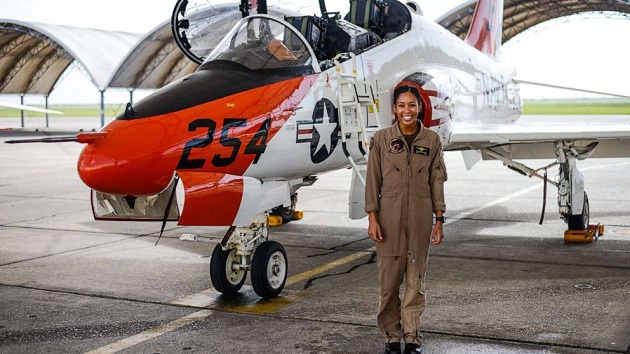 Lt. J.g. Luke Redito/U.S. NavyBy HALEY YAMADAVIA, GMA(WASHINGTON) — One woman is soaring to new heights as the first Black female tactical jet pilot for the U.S. Navy.”I don’t think the goal in my life is to necessarily be the first at anything. That was never something that I set out to do, [piloting] was just something I was interested in and I found out later,” Lt. j.g. Madeline “Maddy” Swegle said in a new video released by the Navy ahead of her July 31 winging ceremony. “I am really honored that I get to wear the wings and get to fly planes and call myself a pilot.”A Virginia native, Swegle became the U.S. Navy’s first Black female tactical air (TACAIR) pilot on July 7 after she completed her final undergraduate training in a T-45C Goshawk jet trainer, according to the Navy.”To show up here at this level, you need to be a top performer and then you have to continue to perform while you’re here. These are the best pilots in the world that are trained here — the very best,” Matthew Maher, commanding officer of training, said in the video.”It takes long hours, a lot of blood, sweat and tears and a commitment to excellence day in and day out. … They’re going to go out and make all of us very proud,” he added.Now, Swegle will receive her Wings of Gold during a small ceremony at Naval Air Station in Kingsville, Texas, on July 31.”Lt. j.g. Swegle has proven to be a courageous trailblazer,” wrote Vice Adm. DeWolfe “Bullet” Miller III, commander of the Naval Air Forces, in a statement. “She has joined a select group of people who earned Wings of Gold and answered the call to defend our nation from the air. The diversity of that group — with differences in background, skill and thought — makes us a stronger fighting force.”Swegle said that she’s dreamed of being a pilot ever since she was young and her parents would take her to see the Blue Angels, the Navy’s flight demonstration squadron, when they would come to her hometown.”My parents raised me and they told me that I can be whatever I wanted to be. We would go see the Blue Angels when they were in town. I don’t remember specifically how old I was, but they were just so cool I loved them. I love fast planes,” said Swegle.Swegle called the process of training with a higher-performance aircraft at this level “daunting,” but also exhilarating and “rewarding.””[Jet piloting] is fun because it is difficult at the same time. I know that I had to work to get [the jet] to behave and it took a lot of fighting the aircraft and figuring out how it was going to perform,” she explained in the video about her three years of training. “Looking back it’s amazing to think about where I started and I had never been in an airplane before so, it’s just one step at a time. It’s really cool to think of all of the things I’ve done now which I’d never think I’d be able to do.”Swegle follows in the footsteps of Brenda E. Robinson, the first Black female naval aviator, who earned her Wings of Gold on June 6, 1980, according to the statement.On July 7, Swegle’s friend took to Twitter to share the good news about her “best friend making history.” The post has since garnered more than 191,000 likes and many congratulations for Swegle on her success.”Her story begins, we see you Captain Marvel,” read one comment.”I don’t know this woman, but I am so proud of her and her accomplishment,” read another.Swegle said that she wants to uplift other women and minorities with her story.”I think that representation is important because we are a very diverse nation. So I would like everybody to believe that they can achieve whatever they want to do,” said Swegle.”I guess I hope that my legacy will be that there will be a lot of other women and minority women and just different faces that come forward … be encouraged and just know that they have all the tools that they need and follow their dreams,” she added.Copyright © 2020, ABC Audio. All rights reserved.