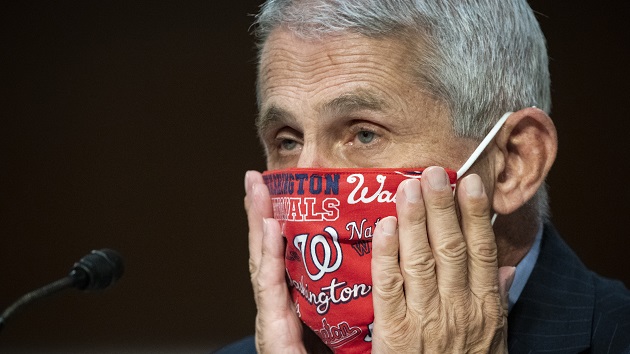 Al Drago/Pool/Getty ImagesBy CATERINA ANDREANO, ABC News(WASHINGTON) — Dr. Anthony Fauci suggested Wednesday that Americans should consider wearing goggles or a face shield in order to prevent spreading or catching COVID-19.”If you have goggles or an eye shield, you should use it,” the nation’s top infectious disease expert told ABC News Chief Medical Correspondent Dr. Jennifer Ashton during an Instagram Live conversation on ABC News.When asked if we’re going to get to a point where eye protection is recommended, the director of the National Institute of Allergy and Infectious Diseases responded, “It might, if you really want perfect protection of the mucosal surfaces.””You have mucosa in the nose, mucosa in the mouth, but you also have mucosa in the eye,” he continued. “Theoretically, you should protect all the mucosal surfaces. So if you have goggles or an eye shield you should use it.”He noted that googles and eye or face shields are “not universally recommended” at this time, “but if you really want to be complete, you should probably use it if you can.”The novel coronavirus pandemic has killed more than 662,000 people worldwide so far and more than 16.8 million people across the world have been diagnosed with COVID-19, the disease caused by the new respiratory virus, according to data from the Center for Systems Science and Engineering at Johns Hopkins University.Currently, the United States is the worst-affected country, with more than 4.3 million diagnosed cases and over 150,000 deaths.Fauci watching Ohio, Tennessee, Kentucky and IndianaFauci called out four states by name that are struggling to get the virus in check. He and Dr. Deborah Birx, the White House’s coronavirus task force coordinator, addressed these states in a call with governors Tuesday.Ohio, Tennessee, Kentucky and Indiana are among those that “are starting to show that very subtle increase in percent positives among the total tested, which is a surefire hint that you may be getting into the same sort of trouble with those states that the southern states got into trouble with. So we’re watching that really carefully.”Birx has toured those states in the past week, meeting with officials in each state.Fauci on testing window after exposureFauci also discussed when people should get tested for COVID-19 if they believe they’ve been exposed to the virus, since there are no official guidelines from the Centers for Disease Control and Prevention or the National Institutes of Health on when to get tested.”That question came up at the task force meeting yesterday and we asked the same thing and we said there’s no real recommendation,” Fauci said. “I would think that five [days] is good. I might even go a day or so early because the incubation period of when you get symptoms is about five days.”The window Fauci recommended is “no earlier than three [days] or no later than five or six.”Fauci looks ahead to flu seasonAs the summer transitions into the fall, Fauci also discussed the oncoming flu season.Fauci said he hopes wearing masks will help limit the spread of influenza as well.”It is inevitable that we’re going to have some degree of flu,” he said. “I’m hoping that the wearing of masks and other coverings are going to not only protect us against COVID-19, but also help protect us against influenza.”He said two circulating respiratory viruses really “confuses the situation” since symptoms of the novel coronavirus and flu are so similar.”Go out there and get your flu shot when the flu vaccine becomes available,” he urged.Fauci on his personal lifeFauci chalked up his own good health to genetics, which he said was probably inherited by his father, who lived to 97. The 79-year-old has joked about his own age, most recently when he struggled while throwing out the first pitch at the Washington Nationals’ home opener.He gets up at 5 a.m. every morning, grabs juice or eggs and will drink two “very strong” double espressos as he tackles his email. He works late, tries to squeeze in a run — he noted he used to run marathons in his younger days — and then will work “well into the night.””Sleep is the one thing that’s really suffered in all this,” he said.He also joked about his baseball card, featuring his opening pitch last week, which is breaking sales records: “It’s a combination of humbling and really embarrassing. … Yogi Berra and Mickey Mantle are looking down from heaven at me and saying, ‘Are you kidding?"”

What is next for Juul after FDA temporarily suspends ban of its e-cigarettes and other products?