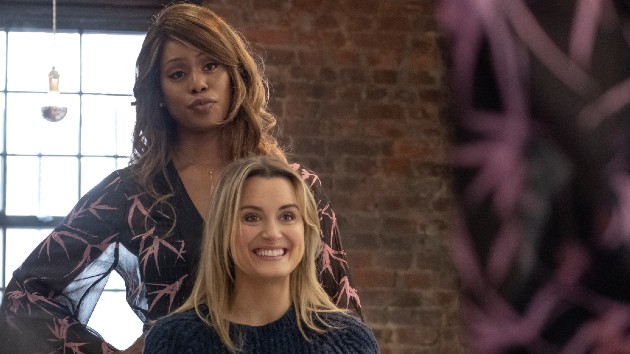 L-R – Laverne Cox, Taylor Schilling in “Orange is the New Black” – Jojo Whilden/Netflix(LOS ANGELES) — In what was one of the more awkward moments of Tuesday’s Emmy nominations announcements, Leslie Jones fumbled the news that her fellow presenter, Laverne Cox, had been nominated.

Watching the livestream, Cox clearly doesn’t know how to take the news, and insisted on-air that Jones misspoke — despite the fact that Jones screamed “You’ve been nominated!” multiple times.

Cox, who in 2014 became the first openly trans performer to be nominated for an Emmy in an acting category, did in fact earn a nod Tuesday in the Outstanding Guest Actress in a Drama Series category for her work on the final season of Orange Is the New Black.

“It was so weird,” Cox tells E! “I thought like, ‘Leslie, what are you doing? I was nominated last year! What are you talking about?…I’ve never been that awkward on live TV, I don’t think, in my life.” The actress adds, “Like, why? I’m in one scene! It still feels like somebody made a mistake!”

That being said, Cox says she’s “really grateful” for the recognition. “I know that other actors vote for this, and for my colleagues to value the work is just incredible. It’s amazing,” she says.  “I love actors so much and I love what I do, so I’m honored, but it’s just shocking.”

The trailblazing actress and activist added, “It’s a dream that I’ve had for a very long time, and I just think about the little kid growing up in Alabama that I was, dreaming of moments like this, and so in honor of that little kid who still lives inside of me, I’m just humbled and insanely excited that I even get to present and that I get to be a nominee again. The little kid is very, very, very happy.”

In brief: ‘Yellowstone’ prequel gets a title change, and more